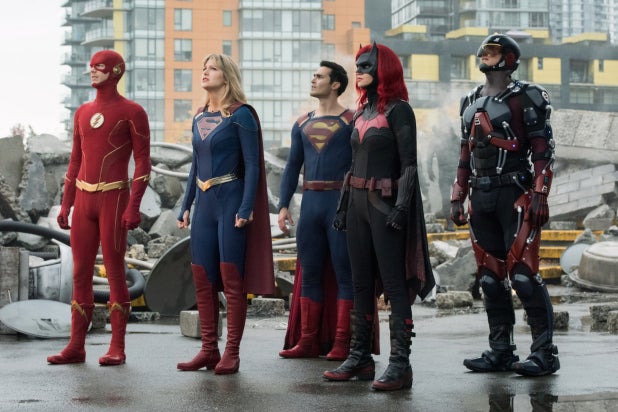 The CW has spent the last year teasing its epic “Crisis on Infinite Earths” event, which begins on Sunday and brings together the entire “Arrowverse” in an unprecedented TV event whose plot spans both multiple timelines and an infinite number of realities.

The upcoming five-part event features not one, not two, but three different versions of Superman, two Lois Lanes, a futuristic Bruce Wayne, and a slew of characters that last appeared during the days of The WB. It’s the culmination of the last eight years, which began with “Arrow” in 2012 and now includes six different series.

Speaking with reporters Thursday at The CW’s Burbank offices, Marc Guggenheim, who is serving of showrunner for the “Crisis” event, described the production of the crossover as being “three-dimensional chess with Rubik’s cubes.” Guggenheim, who has been with the “Arrowverse” since its inception, spearheaded the effort with the help of each show’s individual showrunners.

“It’s a really tough thing to produce and I think all the shows have felt it in one way or another. It’s a real huge challenge to get the scope and excitement that we want out of it,” said “Legends of Tomorrow” executive producer Keto Shimizu. Robert Rovner, showrunner for “Supergirl,” added: “I think one of the things that was challenging and unique to this one was just the amount of guest cast that we had, and making sure that we could get those people on board. Making sure all their schedules worked out.”

“Crisis” includes Brandon Routh playing a dual role of Superman and his “Legends” character Ray Palmer, a “Smallville” reunion with Tom Welling and Erica Durance, and Kevin Conroy appearing as a live-action Bruce Wayne. Guggenheim explained they listed every scene they wanted they wanted to film for the crossover on strips of paper — each was color-coded by which show it belonged to — and put them all on a giant calendar. The goal, Guggenheim said, was to make sure that each show filmed at least one scene every day.

Even though “Crisis” wasn’t going to happen until midway through the 2019-20 TV season, the size and scope of the event meant Guggenheim and the rest of the showrunners had to break that story first. “We basically started breaking out the crossover before we got to a lot of episodes that lead right up to it,” he said, noting they began right after the summer hiatus. “There was a little bit of educated guesswork on our part… in terms of breaking out the story and kind of having a sense of where all the shows would be.”

For “Legends of Tomorrow,” the crossover proved to be extra challenging since the show’s fifth season doesn’t premiere until after “Crisis” ends. “‘Crisis’ is essentially our prequel to our Season 5,” Shimizu said. Except that they began to break their own Season 5 storyline, before “Crisis” was put together. “We had to know the sequel to everything that was going to happen in ‘Crisis,’ before we’ve even written ‘Crisis,’ so that was very tricky for us. We had to know, as we were breaking first stuff, OK what is going to happen at the very end of this. How are we going to platform the very end of this crisis so we can start writing our season.”

Meanwhile, on the other end of the spectrum, “Arrow” dedicated its final run — the series finale is scheduled for Jan. 28, shortly after the crossover ends — as one long lead up to “Crisis.”

Created by Marv Wolfman and George Perez, “Crisis on Infinite Earths” was a best-selling 12-issue series running from 1985 to 1986 that replaced the DC multiverse, which since 1961’s “The Flash of Two Worlds” had explained the company’s varying and contradictory continuities, with a single streamlined universe and a complete reboot of most DC characters. It was a critical hit and a bestseller for DC and is credited with popularizing the idea of large-scale crossovers in comics.

“Crisis on Infinite Earths” will be the sixth crossover since the “Arrowverse” began, with each one building off the previous. During last year’s “Elseworlds”-themed event, it ended with a tease that “Crisis” was going to be the next crossover. It begins on Dec. 8 with “Supergirl,” which will be followed by “Batwoman” and “The Flash” on Dec. 9 and 10, respectively. “Crisis on Infinite Earths” will wrap up on Jan. 14 with “Arrow” and “DC’s Legends of Tomorrow” airing back-to-back.

“We’ve been doing it in steps with the crossovers,” Shimizu said. “It felt a bit more manageable because of that. This year definitely seemed the most ambitious and biggest yet. It was very challenging. However, we kind of knew how to prepare ourselves for it.”