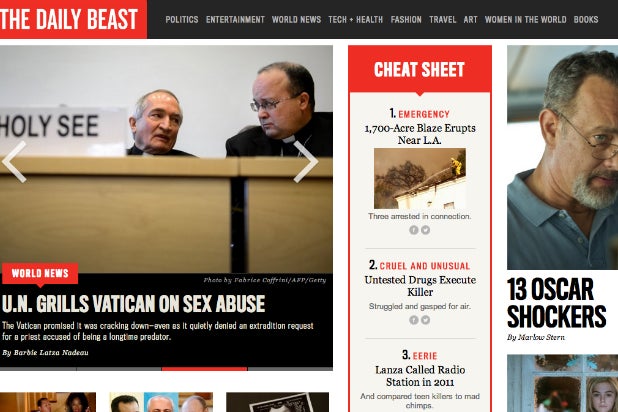 Acting interim executive editor John Avlon has been promoted to editor in chief, filling the role vacated by Tina Brown shortly after the site split from Newsweek in August 2013, according to an internal memo.

Shachtman most recently ran Foreign Policy’s newsroom as executive editor, but earned his digital stripes as co-founder and editor of Wired’s “Danger Room” blog, which focuses on national security. The blog won a National Magazine Award for reporting in digital media in 2012 and an Online Journalism Award for beat reporting in 2007.

Here’s Avlon’s memo to the staff obtained by TheWrap:

I am pleased to announce that Noah Shachtman is joining The Daily Beast as Executive Editor, effective February 1st.

Noah is an accomplished digital-first journalist and joins us after working at Foreign Policy as Executive Editor for News, where his team reeled in big scoops on Syria, the NSA scandals, and the CIA drone program. He is perhaps best known as co-founder and editor of Wired’s Danger Room blog, which won a National Magazine Award for reporting in digital media and an Online Journalism Award for best beat reporting. He’s a respected mentor of young talent and he’s got the right aggressive news metabolism for The Daily Beast. As a former professional bass player, campaign staffer and long-suffering Knicks fan, Noah understands both sides of the high-low, politics and pop-culture news mix that makes The Daily Beast a distinct destination and a growing success.

The Daily Beast grew 35% over the past year, averaging 13.7 million unique visitors a month as measured by Omniture. Our homepage and article design refresh, led by Chief Digital Officer Mike Dyer, has resulted in increased time spent on the site per visit and improved advertising performance. In another sign of vibrant growth, The Daily Beast’s social media referrals rose 44% over the past year and our Facebook and Twitter communities more than doubled in 2013.

I’m looking forward to all that’s ahead for The Daily Beast. We’re poised to rise to new heights while focusing on our core strengths. Here’s to a great 2014 for us all.

For the record: A previous version of this story stated that Shactman was stepping into the role vacated by Brown, but Avlon was promoted into her position. TheWrap regrets the error.