Sometimes reporters insert themselves into their stories.

Other times, they are dragged into them, often in bizarre fashion.

Which is what happened to Adam Rubin yesterday. Rubin, who for the past seven years has covered the New York Mets for the Daily News, unwittingly found himself at the center of a scandal yesterday involving one of the team’s executives. 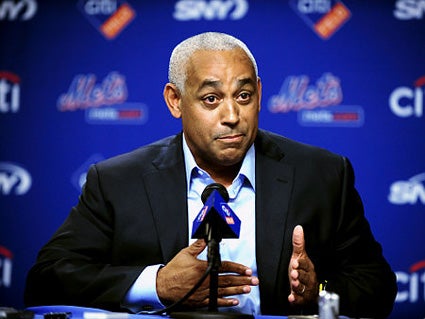 During a pre-game press conference called by the Mets to announce the firing of Tony Bernazard, the director of player development, Omar Minaya (pictured, above), the Mets general manager, implied that Rubin had the written articles that led to Bernazard’s ouster because Rubin had “lobbied” for a job in the Mets front office — specifically, Bernazard’s job.

"Adam has lobbied for the player development position," Minaya said. "I scuffled with it early on. I had to think about that."

Rubin fired back at Minaya during the press conference — which was carried live on radio and television in New York — calling the G.M.’s accusations “despicable.”

“Is what you’re alleging that I tried to tear Tony down to take his job? Is that what you’re saying?!” Rubin said. “It’s pretty despicable to say that.”

During the Mets game last night, in a hastily-called press conference a few hours after the one before the game, Minaya told reporters assembled in the press box that he stood by accusations, but conceded it was not the right “forum” to do so.

Jeff Wilpon, the Mets chief operating officer, told the New York Times that Rubin had asked him for career advice — but did not say he was lobbying for a job. 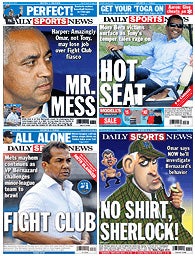 As one PR executive — and the biggest Mets fan I know — put it: “This story is getting more twisted by the day.”

It was already twisted enough. Last week, Rubin reported that Bernazard — during a visit to the Mets’ minor league affiliate in Binghamton, New York — took off his shirt in the clubhouse and challenged the team to a fight.

He later reported that Bernazard has a history of berating other Mets employees, often via profanity-laced tirades.

Rubin has not returned an e-mail seeking comment. But he responded directly to Minaya in his Daily News column today.

“I want to get something straight,” Rubin wrote. “Everything I wrote about Tony Bernazard … is accurate. My reporting was solid, met the journalistic standards of sourcing and beyond and was untainted by any personal agenda on my part.”

Rubin continued: “But instead of focusing on the horrors Bernazard inflicted upon Mets farmhands and team employees, Minaya tried to redirect the story from Bernazard’s reprehensible actions … to me.”

“The point is, Adam Rubin is not the issue here,” Keith Hernandez, legendary Mets first baseman and current announcer on SNY, the Mets-owned television network, said. “Adam Rubin is a beat writer and his job is to cover the team. He got a lead on a story and, guess what? He reported it correctly. He did nothing wrong.”

(Photos courtesy of the Daily News)