Wang Jianlin, the richest man in China and chairman of its exploding Dalian Wanda Group, announced sweeping ambitions for the entertainment conglomerate in Qingdao over the weekend, including an up to $8 billion mega studio and theme park, multiple Hollywood partnerships and other global entertainment investments, according to several media reports.

His audience: A who’s-who of Hollywood luminaries, from Leonardo DiCaprio and Nicole Kidman to studio executives and representatives from the Academy of Motion Picture Arts and Sciences, who were flown to the seaside city for the groundbreaking ceremony and meet-andd-greet, as TheWrap first reported.

His stated goal: To make China the world’s dominant film industry by 2018.

And he’s not being subtle about it: According to the Wall Street Journal, a Chinese version of the Hollywood sign is planned for the mountain overlooking the studio-slash-theme-park, tentatively titled “Qingdao Oriental Movie Metropolis.”

“It’s my dream,” Wang told the WSJ. “When I decided in 2005 to enter the film industry, opening theaters, 99% of our stakeholders were opposed, saying the investment wouldn’t pay off … But I decided to chase my dream. Now look at this market.”

The entertainment complex will include “the world’s largest” studio facilities, a theme park, museums, a permanent auto show, a yacht center, bars and restaurants and other attractions. It also will host an annual film festival that Wang predicted would be the world’s largest in just a handful of years.

Wanda also said it has inked deals with top agencies to attract talent to its film production, which Wang said would be around 30 foreign films per year – this, in addition to its 100 or more homegrown titles. Though executives and representatives from Sony, Warner Bros., Paramount, Lionsgate and Weinstein Co. were in Qingdao on Sunday, exactly who’s committed to what was not immediately clear.

The more than 13 million square-foot facility, which overlooks the Yellow Sea in the northeastern Chinese province, is on pace for a partial 2016 opening, and should be fully functional the following year. 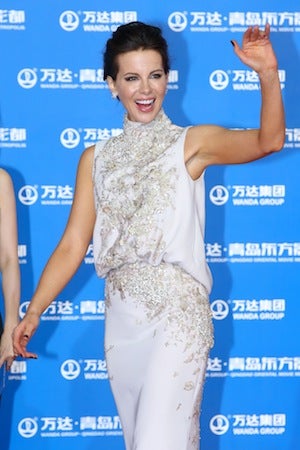 Though Chinese investors have a spotty record on delivering on lofty stated plans, in this case, there is big bank behind the ballyhoo: Wanda owns 6,000 Chinese movie screens, acquired AMC Theaters in May for $2.6 billion and recently gave $20 million to the Academy’s museum, as TheWrap previously reported. Wanda said in its Sunday announcement that AMPAS would help advise on its film festival plans.

The Journal, citing a source, said Wanda spent $50 million to get so much Hollywood brass and talent to the ceremony – a list that included Harvey Weinstein, Kate Beckinsale, Ewan McGregor, John Travolta and Chinese stars Zhang Ziyi, Jet Li and Tony Leung.

Wang, whose personal assets Bloomberg estimates number between $14 billion and $22 billion, loves to make grand proclamations: He’d previously said he plans to invest as much as $10 billion in U.S. entertainment and property deals.

Wang told the WSJ it would take some years, but “I strongly believe that China will be the center of the global film industry.”