Updated Tuesday afternoon: After re-listening to the voice at the end, we realized it’s probably Dan Aykroyd’s Ray Stantz, Not Bill Murray’s Peter Venkman, who answers the phone.

A new trailer for “Ghostbusters: Afterlife” has arrived, and it’s brought an original “Ghostbusters” character with it. Well, sort of.

In “Ghostbusters: Afterlife,” a single mom (Carrie Coon) and her two kids (Mckenna Grace and Finn Wolfhard) arrive in Summerville and begin to uncover their connection to the original ghostbusters — one of whom is apparently their grandfather. He left the family an old decrepit house, full of secrets and old Ghostbuster gadgets, including the iconic station wagon and a proton pack gun, as the kids discover. Unsurprisingly, things get supernatural pretty quickly.

“Somehow a town with no faultlines is shaking on a daily basis,” Paul Rudd’s character ponders. But this is “Ghostbusters”; there’s more than just shaking. There’s spook, spectors, ghosts and… zombies? Fortunately, the new crew won’t have to handle things alone. 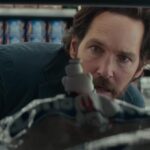 In the final moments of the trailer, we see a man’s arm move to answer a phone before hearing a very familiar voice gruffly say, “We’re closed.” That voice, we’re pretty sure, belongs to Dan Aykroyd’s Dr. Ray Stantz, who is still hard at work in his occult bookshop — which we think is the same one he owned back in 1989’s “Ghostbusters 2.”

“Ghostbusters: Afterlife” hits theaters on Nov. 11. The film is produced by Ivan Reitman and directed by Jason Reitman, who also co-wrote the script with Gil Kenan. You can watch the full trailer via the video above.