For fans of Dan Harmon, there could never be enough of his sideways take on human relationships and pop culture. For Harmon, that comes at a cost.

Now back on “Community” after a season hiatus and with a new animated series, “Rick and Morty” on Adult Swim, Harmon is finding that the balancing act means that other parts of his life have to suffer.

“I was surprised even to find out what a time suck ‘Community’ is,” Harmon told TheWrap.

“I was deluded and thought I can juggle ‘Community’ and anything,” he continued. “Just ask my girlfriend and my dog. At least with Season 5 of Community, it’s really just me and Chris McKenna with a lower budget, less time and a lot of really passionate green writers trying to do the best season of the five, left to our own devices with no more risk of anyone calling it mismanagement. We have no cap in the time that we’ll spend on that show. I feel like I’m in the army without weekend leave.”

Luckily, he has co-creator Justin Roiland on “Rick and Morty,” who manages the day-to-day operations of the animated series about Rick and his grandson’s madcap adventures in time and space.

Harmon contributes largely to “Rick and Morty’s” stories and structure with Roiland, who also oversees the look and feel of the series in addition to voicing the title characters. 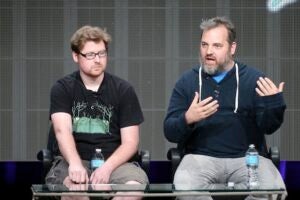 “It’s a really great collaboration between the two of us, both playing to our strengths,” Roiland, pictured right with Harmon, told TheWrap.

“Dan’s contribution to the show is monumental,” he also said. “Every script he basically takes and filters, he runs his hand across before it goes to the record. The stuff with the parents and their relationship and that really sophisticated dialogue, all that kind of stuff is totally out of my wheelhouse.”

Speaking with Harmon about his role on the project, it almost seems as if his participation in “Rick and Morty” is largely driven by the opportunity of giving Roiland’s vision a forum.

“[Justin is] huge in the writers room and the whole point of the show is to follow his laughter and the things that make him happy,” Harmon said.

Meanwhile, Harmon says that “Community,” a comedy about a group of oddly coupled friends attending community college, can be all-encompassing.

“At some point, I had to look at the 13 episodes of ‘Community’ as an eclipse, ‘I’ll talk to you on the other side’ kind of thing,” he explained. “And luckily, ‘Rick and Morty’ had largely wrapped up the portions that are Harmon-dependent right as ‘Community’ lifted off. And now ‘Community’ is getting into the homestretch. And hopefully, we’ll get another season.”