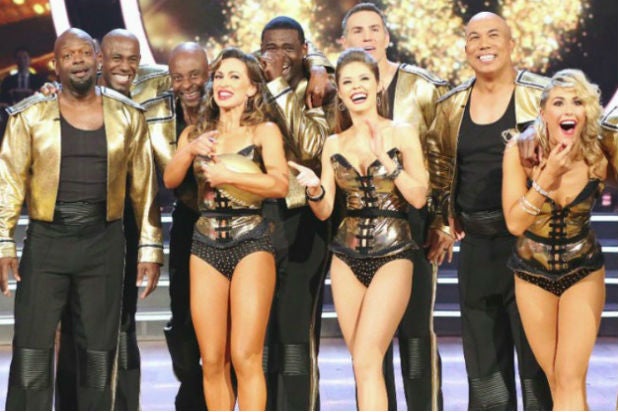 Following Monday’s shocking elimination of “Dancing With the Stars” fan favorite Willow Shields, viewers could rest easy on Tuesday knowing that no one would be sent home during the 10th anniversary special.

With so many former athletes being alums of the show, it was only fitting that a highlight of the hour-long special was a football-inspired paso doble set to the iconic NFL theme song, featuring Driver, Warner, Hines Ward, Jacoby Jones, Emmitt Smith, Michael Irvin and Jerry Rice.

“It has transformed so many different things,” Hall of Famer Smith told Erin Andrews of his life after winning the third season. “Everywhere I go, men and women, boys and girls, they all know me from ‘Dancing With the Stars.'”

Even Season 1 winner, actress Kelly Monaco, was back for a steamy performance with pro dancer Val Chmerkovskiy, who’s been heating up the floor with Rumer Willis lately.

Patti LaBelle, who was recently voted off the show, came back to sing her classic hit “Lady Marmalade” with “Glee’s” Amber Riley and Lil’ Kim.

Unfortunately, Derek Hough had to skip an energetic routine with Mark Ballas and former partners Purdy, Menounos, Amber Riley and Olympian Kristi Yamaguchi after injuring himself during rehearsals.

The anniversary special ended with a bang, as all the past contestants, pros, judges and hosts filled the floor for one big dance party.