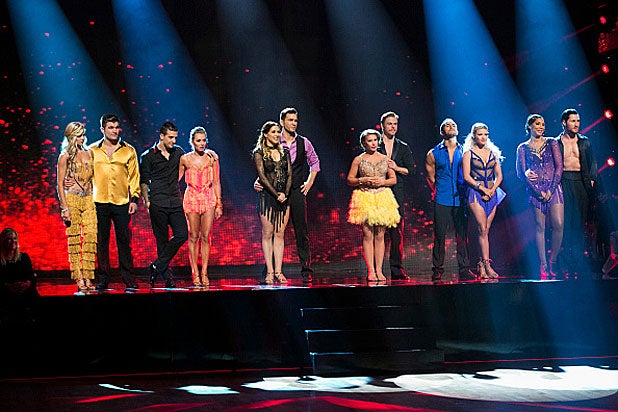 (Spoiler alert: Please do not read on if you haven’t watch Monday’s episode of “Dancing With the Stars”)

Emotions ran high on Monday’s episode of “Dancing With the Stars,” as the seven remaining couples performed routines dedicated to important people in their lives.

While many of the heartfelt performances prompted tears from both the contestants and the judges, one lucky couple also won immunity for the week and three extra points.

Paris train hero Alek Skarlatos, singer Andy Grammer and actress Alexa PenaVega all had the lowest scores of the night — and despite beating Skarlatos in a dance-off, it was Grammer who got the boot.

“It’s actually kind of fitting that I would leave tonight after really getting to honor [my mom] through dance,” the “Honey, I’m Good” singer said. “And I’m going out on a handspring,” he added, before bursting into the worm.

As for the other end of the points table, Bindi Irwin was once again a hit after choosing actress Grace Kelly — surprisingly not her late father, Steve Irwin — as her icon. The 17-year-old Australian’s foxtrot was a crowd-pleaser, but for once she didn’t get top marks after being faulted for her posture.

U.S. Army ranger Skarlatos dedicated his performance to “American Sniper” subject Chris Kyle, but his dance to “I Need a Hero” was deemed a little too serious by some.

Nick was the star of the night, however, not just for his flawless routine to “Can’t Help Falling in Love,” but also because the former Backstreet Boy announced that he and pregnant wife, Lauren, are having a baby boy.

won plenty of congratulations, top marks — and the valuable immunity.