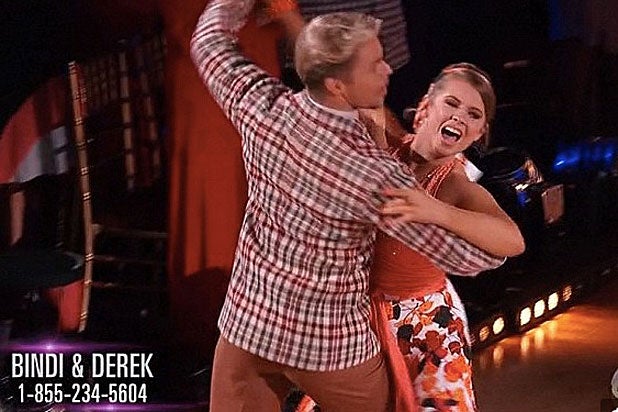 There wasn’t a dry eye in the house when “Dancing With the Stars” contestants recalled their most memorable years on Monday’s show.

Before the contestants took to the stage, however, it was revealed that host Tom Bergeron would be absent to be at the bedside of his ailing father. “He’s given me a lifetime of support. Time to return the favor,” the host tweeted, as former champion Alfonso Ribeiro stood in for him.

Bindi Irwin said that what has shaped her life the most was the death nine years ago of her father, “Crocodile Hunter” star Steve Irwin. “I’ve never really dwelled on when he passed away — I am ready to tell that story,” she said, before bursting into tears during rehearsals while looking at old family photos.

“This dance is for my dad and my family,” Irwin said, unable to stop crying after her performance to “Every Breath You Take” by The Police.

Hero and Army National Guardsman Alek Skarlatos detailed his experiences when he stopped a gunman on a Paris-bound train from Amsterdam last August. On Monday, it was revealed that he was touched by tragedy once again as Skarlatos is enrolled at Umpqua Community College in Oregon where nine people were killed Thursday.

If he hadn’t been starring on the reality competition show, he said, “I would have had classes that day … even the train made more sense than this does.”

Also Read: Alfonso Ribeiro Will Step In for Tom Bergeron as Host of 'Dancing With the Stars'

Controversial actor Gary Busey went back to the year he was nominated for an Oscar in 1979 for “The Buddy Holly Story” by performing to one of the singer’s biggest hits, “That’ll Be the Day.”

Meanwhile, Tamar Braxton recalled when she thought she was going to lose her husband, Vincent, to a blood clot, and celebrity chef Paula Deen told viewers of when she decided to get a divorce and start her own business.