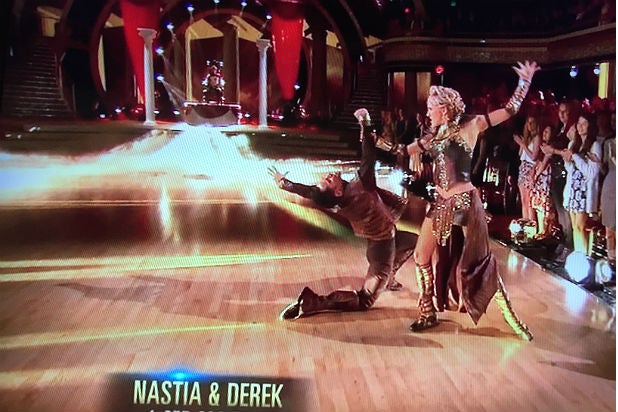 (Spoiler alert: Please do not read if you haven’t watched Monday’s episode of “Dancing With the Stars.”)

The “Dancing With the Stars” Season 20 contestants had twice the opportunity to impress the judges on Monday, but also double the risk of going home.

While they are all safe for the time being, two couples will be eliminated on Tuesday based on the combined scores and votes from last week and this week.

One dancer who shouldn’t be too worried was Rumer Willis, who earned a perfect score after she and Val Chmerkovskiy blew away the competition. Their classic rumba got both mom Demi Moore and sister Talullah on their feet applauding as Julianne Hough told them: “That was gold.”

In a shake up for the quarterfinals, the hopefuls for the Mirror Ball Trophy also did a Trio Challenge when they were joined by another pro.

Also Read: 'Dancing With the Stars' Disney Night, See Which Contestant Gets the Boot

Artem Chigvintsev partnered with Rumer and Val, who once again achieved perfection.

Other hits of the night were Riker Lynch and partner Sharna Burgess, who delivered an “awesome” jazz dance.

Derek Hough hasn’t been able to dance since injuring his foot, but he joined in for Nastia Liukin and Sasha Farber’s “Games of Thrones” paso doble by sitting on a majestic throne, which host Tom Bergeron called “some of the best broken-toe dancing you’re ever gonna see.”