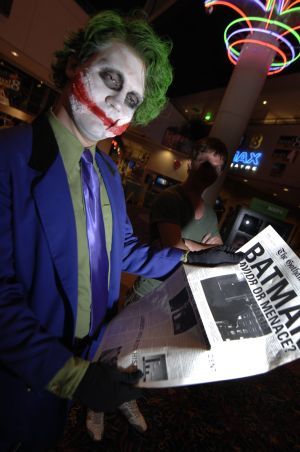 Hollywood waits for events like these – glistening, bubble-like moments in pop culture when a movie grabs the focus of the entire country, and the world. “The Dark Knight” is one of those moments. It broke its first record today: midnight screenings across the country took in $18.5 million, beating "Star Wars Episode III: Revenge of the Sith," which took in $16.9 million in its midnight showings in 2005, according to Media By Numbers.

Strap on your seatbelts, ladies and gents: "Dark Knight" will be the memorable moment of summer 2008.

Rare indeed is the movie that manages to combine an expectant fan base, a gripping story well told, memorable performances and broad appeal. In addition the movie features real-life drama, the tragic, premature death of a lead performer, Heath Ledger as the Joker, in the wake of principal photography. So the gauntlet has been thrown, the race has begun.

"Dark Knight," director Chris Nolan’s $180 million vision of the Batman fable and sequel to "Batman Begins," unrolls in 4,366 theaters today. Fans at the midnight screenings came in costume, and shrieked their delight through the experience.

Why do records matter so much? Hollywood loves them, and so do fans. The five previous Batman films had opening weekends in the $40-$53 million range. But we’re hearing numbers like $120 million for this film. It would not surprise me in the least, given the enthusiasm that’s palpable from coast to coast. (And the Imax screenings are sold out.) The record to beat is “Spider-man III,” which took in $151.1 million in its opening weekend in May 2007. More than that, Hollywood just wants a great, big honking piece of history. (photo of fan at Grand Rapids, Michigan cineplex, from Grand Rapids Press)