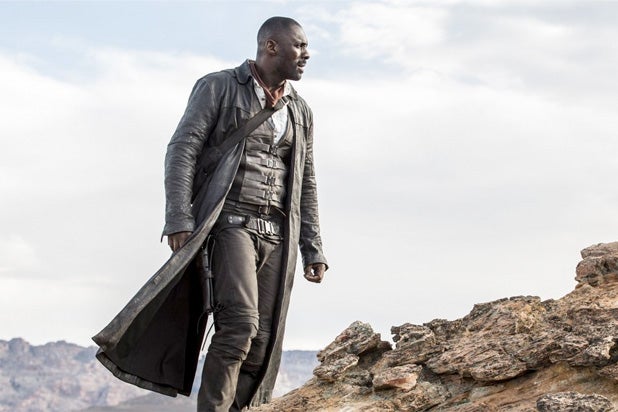 “The Dark Tower” earned $1.8 million at the Thursday box office, on track for Sony’s estimate of an opening weekend in the high teens.

It stars Matthew McConaughey and Idris Elba. Elba is Roland Deschain, a.k.a. The Gunslinger, a roaming knight of the Old West who resides in a parallel dimension known as Mid-World. He crosses paths with Jake Chambers (Tom Taylor), an 11-year-old New Yorker with wanderlust who accidentally crosses over into Mid-World. Together, the two go on a quest to save Mid-World from destruction, hoping to reach the titular Dark Tower and stop a dark sorcerer (McConaughey) from using it to control infinite worlds.

Also Read: 'Dark Tower' Is a 'Small, Sad Pile of Rubble' and 8 Other Disastrous Reviews

Heading into the weekend, independent trackers estimated that the fantasy film would open in the low $20 million range, based on a reported $60 million budget. Sony’s estimate was at $19 million. On Rotten Tomatoes, the film holds a score of 20 percent.

Kathryn Bigelow marks her return to the big screen this weekend with her film “Detroit,” which is expected to make $10 million to $13 million against a reported budget of $30 million. The film made $350,000 last weekend from 20 screens in limited release.

“Detroit” stars “Star Wars” newcomer John Boyega as Melvin Dismukes, a security guard who tried — and failed — to play peacemaker when police and the National Guard stormed the Algiers Motel in 1967 and savagely beat several black suspects during an interrogation to find a suspected sniper during a riot in Motor City.

The film also stars Anthony Mackie, Will Poulter, Jacob Latimore, Algee Smith, Jason Mitchell, and John Krasinski. The film was directed by Bigelow and written by Mark Boal, who both produced with Annapurna founder Megan Ellison, Matthew Budman and Colin Wilson. The film has received a 89 percent rating on Rotten Tomatoes.

Lastly, Halle Berry’s “Kidnap” is opening this weekend. It earned $500,000 from 1,900 locations. The former Relativity film was originally meant to be released in October 2015, but had its release repeatedly pushed back due to the studio’s financial struggles. Finally, in 2017, Relativity lost the rights to the film, and it will now be distributed by new studio Aviron Pictures.

In the thriller directed by Luis Prieto, Berry stars as a mother who goes searching for her son after he goes missing. The film holds a score of 41 percent on Rotten Tomatoes.