It’s unclear what Portnoy did to warrant the suspension. A rep for Twitter would not comment on the suspension except to say “the account you reference has been reinstated.”

But Twitter users noted that earlier in the day, Portnoy — who has a history of blunt, provocative statements — engaged in a Twitter feud with another user, at one point writing, “Let me drop my nuts on your head.”

Portnoy’s suspended Twitter page was reinstated a short time later, albeit without his followers or verification status. For the duration of the suspension, his profile page, @stoolpresidente, simply said “Account Suspended” with a line that read, “Twitter suspends accounts which violate the Twitter Rules.”

Once his account was restored, he simply tweeted, “I’m back,” with a short video of Ric Flair. 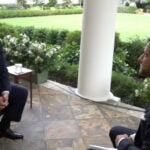 Dave Portnoy was well aware of the suspension, having made two Instagram Story posts with #freeportnoy in them. The hashtag “FreeDavePortnoy” was trending on Friday night.