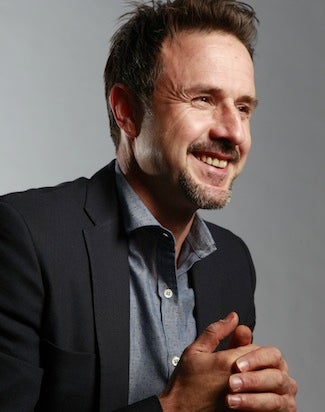 Executive-produced by celebrity chef Jamie Oliver and rapper 50 Cent, the series brings actors, journalists, artists and top experts in their field to a diverse class of students who are working for much-needed school credits to get them back on track.

“The producers approached me and they showed me Jamie Oliver’s version from the U.K. and it was just so heartfelt. It was such a great idea in general,” actor, producer and “Dream School’s” homeroom and drama teacher, David Arquette, told TheWrap.

“I remember school and I remember having a hard time in school,” he continued. “I remember teachers that helped me a lot and inspired me and it just feels like something fun to do, to work with these kids, see them go through their experience and hopefully have some fun in the process and learn something, teach them something.”

TheWrap spoke with Arquette about participating in the program, his approach to teaching and the experiences that touched him.

TheWrap: What was your approach on teaching drama to the kids?
David Arquette: My thing was more like giving them confidence, being able to stand. One of the girls in the class, she was a rapper, she’d rap like this [speaks in a quiet tone] and I told her she has to have some confidence and command the stage. And when you’re standing up in front of people, really address them and look them in the eye. I would just give them little pointers like that. It was more on that level than actual drama. We didn’t do any scenes or nothing like that.

How’d you see your role as their homeroom teacher?
I kind of played it by ear a bit. Luckily, they had certified teachers on-set that were actually making sure they had a certain curriculum. For me, homeroom was more of a place to get grounded; [I] ask them about how their experience is going so far. We did an exercise where we put up a mirror and asked them to speak to themselves.

Alan, a transgender student, brought you to tears during the mirror exercise, because he reminded you of what your sister Alexis went through as a transgender kid. Were you surprised those feelings came bubbling up?
A little bit. They told me about the exercise and we called the different kids up. Alan was really brave and honest. It touched me. It brought up a lot of feelings of what a lot of kids are going through nowadays. Kids? People in general can be so cruel. It was really a matter of remembering that and it did all bubble up and it did affect me. No matter what I try to do as an actor, as a host, at my club, whatever it is you’re always looking for something real, something tangible, something honest. And that was a moment that was real honest and it was a moment that was very powerful.

Alan sort of saw that as a turning point. He said that he knew that he had at least one ally at the school if the kids didn’t accept him.
The coolest thing was they did. It was a pretty amazing group. As tough as they were, they didn’t really attack each other. For the most part, they felt lucky for being there and they were respectful to each other.

These are headstrong kids. What was your approach when the students broke the rules?
These kids are dealing with a lot at school and also at home, just their whole world is pretty complex. I tried not to punish or be mean in any way. I tried more so to just break it down for them and say, “Well, you can make this decision, but you’re really just hurting yourself by not taking advantage of it.” Some of the kids just didn’t feel comfortable engaging. I’m not sure if it was about taking the whole thing seriously as much as it was too much what they’re going through, what they’re experiencing, all of that. And on top of it, there are cameras in your face. It’s not an easy thing to do. For one, it’s not entirely natural. As much as it disappears throughout the day, it’s still there and people are still in your face and if you’re having a hard time going through something emotional, it’s hard to block them out.

Did you have any bouts with your own self-confidence during the process?
Oh, absolutely the whole time. I kept saying, “Listen, I think they might kick me out of here, too, soon.”

Is there something you did in class that you hope makes it on-screen this season?
Yeah, they wrote their dreams and hopes and we kind of made it a poetry exercise, a performance exercise, so that part was really nice to seem them all sort of come out of their shells and speak their mind. There were certain moments when you can see the kids were playing games with it. When you can get them grounded and honest and get them to look at it in a different sort of honest way, it turns into a growing thing. And I think that happens toward the end of the season.