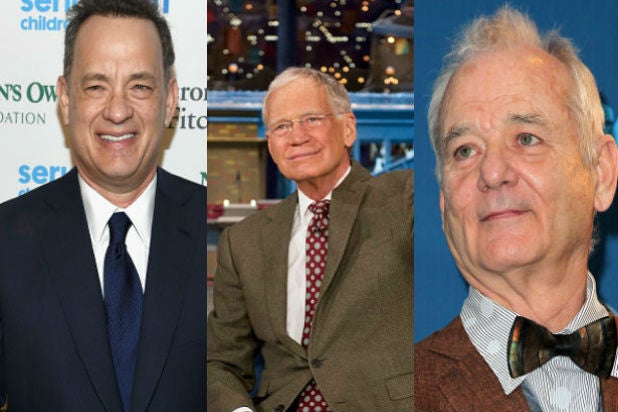 David Letterman is ending his “Late Show” run just as it began.

Tom Hanks and Bill Murray, who were among his first guests, will return for the late-night host’s final shows. Rocker Eddie Vedder will also lend his voice to help send Letterman off on a high note.

Hanks first appeared on “Late Night,” Letterman’s previous talk show, on April 4, 1984 and will make his 60th and final appearance with the host on May 18. Murray was the first guest on both “Late Night” and “The Late Show.”

The three-night send off event kicks off May 18 with Hanks. Also that night,  Vedder will make a special music performance backed by Paul Shaffer and the CBS Orchestra.

Murray will continue the fetivities on May 19, which marks his 44th overall and final appearance with the host. These shows all lead up to Letterman’s final broadcast May 20, which will be an hour filled with surprises, memorable highlights, the show’s final Top Ten List and more.

See photos: Jimmy Kimmel Will Not Air New Episode Against David Letterman Finale Out of 'Respect'

“The Late Show With David Letterman” is a production of Worldwide Pants Incorporated. Barbara Gaines, Matt Roberts, Jude Brennan and Rob Burnett are the executive producers.