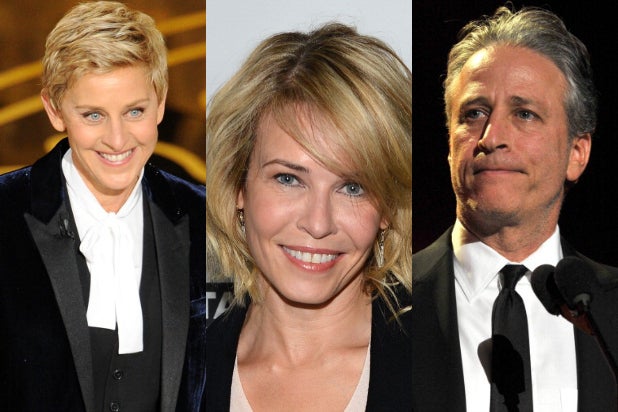 David Letterman is beloved, but perhaps not particularly liked — at least according to Q Score.

The veteran CBS “Late Show” host, who just announced his retirement Thursday, has a relatively low Positive Q Score, a survey used by the TV industry to measure a personality’s likability. Based on TheWrap‘s recent “Most and Least Liked Late-Night Hosts” Q Score series, only Arsenio Hall had a lower rating than Letterman and Carson Daly tied with the “Late Show” host.

So who does America want to inherit Dave’s desk?

Based on Q Score rankings, DeGeneres is the most-liked candidate that TheWrap has identified for Letterman’s seat, with a big 30 Positive Q Score.

Next up are Neil Patrick Harris — a longterm CBS employee and awards-show favorite — and Stephen Colbert, both who scored 20s. Interestingly, Harris and Colbert were also singled out by New York Times’ Bill Carter as the network’s frontrunners.

To create Q Scores, executive vice president Henry Schafer and his team provides a celebrity’s name and a brief description to more than 1,800 viewers. The viewers are asked if they recognize the person, and how they feel about him or her.

The average celebrity has a 31 Recognizability score and a 16 Positive Q Score.

Surprisingly, Conan O’Brien is ranked as the least-liked potential Letterman replacement — scoring a 10.

Chelsea Handler, who recently gave notice of her exit to E!, ties with Craig Ferguson — the guy whose show follows Dave’s.