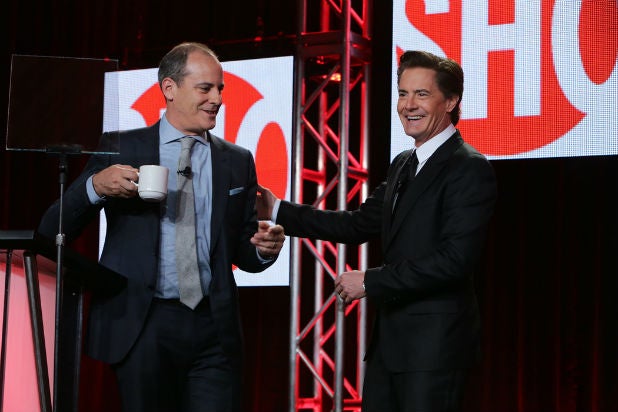 Veteran director David Lynch revealed Sunday that he has dropped out of the cult series reboot after he and the network were unable to reach terms on contract negotiations.

“After 1 year and 4 months of negotiations, I left because not enough money was offered to do the script the way I felt it needed to be done,” Lynch wrote on his personal Twitter account.

“This weekend I started to call actors to let them know I would not be directing. Twin Peaks may still be very much alive at Showtime,” he continued in string of Tweets. “I love the world of Twin Peaks and wish things could have worked out differently.”

Showtime issued a statement to TheWrap shortly after Lynch broke the news:

“We were saddened to read David Lynch‘s statement today since we believed we were working towards solutions with David and his reps on the few remaining deal points. SHOWTIME also loves the world of Twin Peaks and we continue to hold out hope that we can bring it back in all its glory with both of its extraordinary creators, David Lynch and Mark Frost, at its helm.”

News of the series revival was first revealed by Lynch back in October 2014. “Dear Twitter Friends… it is happening again,” he wrote.

Series creators Lynch and Mark Frost were both on board to write and produce all nine episodes and Lynch was on board to direct all the episodes, with a premiere date slated for 2016.

Lynch wrote in October’s first tease of the return: “Dear Twitter Friends: That gum you like is going to come back in style! #damngoodcoffee.”

The original series, which ran from 1990 to 1991 on ABC, centered on the murder of  young woman Laura Palmer in the titular, fictional Washington town.

The revival will take place in present-day Twin Peaks, continuing the lore of the original series.

The Showtime and “Twin Peaks” teaming was a mutual lovefest back in October with the network’s chief and Lynch and Frost expressing how psyched both parties were to be bringing the series back to life.

“What more can I say – ‘Twin Peaks’ with David Lynch and Mark Frost on Showtime in 2016!” Showtime president David Nevins said in October. “To quote Agent Cooper, ‘I have no idea where this will lead us, but I have a definite feeling it will be a place both wonderful and strange.’”

“The mysterious and special world of Twin Peaks is pulling us back. We’re very excited. May the forest be with you,” Lynch and Frost added.