Debra Winger was supposed to play Dottie Hinson in the 1992 baseball flick “A League of Their Own,” but she dropped out after hearing that Columbia Pictures cast Madonna.

While most people would probably be thrilled to work with the iconic pop star, Winger wasn’t excited in the slightest. In a recent interview with The Telegraph promoting her new Apple TV+ series “Mr. Corman,” Winger said that Madonna’s involvement made her feel like the film became a fluff piece.

“A League of Their Own” is a fictionalized version of the real-life All-American Girls Professional Baseball League (AAGPBL), which ran from 1943 to 1964, and its star team, the Rockford Peaches. Winger originally was going to play the lead role of catcher Dottie, who is pushed into trying out for the Peaches right at the beginning of World War II by her excitable sister and pitcher Kit Keller (played by Lori Petty). The two siblings end up playing on the Peaches under the not-so-watchful eye of drunken coach Jimmy Dugan (Tom Hanks). 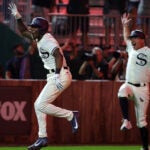 Winger went hardcore in preparing for the role of Dottie; she told The Telegraph she trained for three months with the Chicago Cubs. But all that preparation went out the window when Winger found out that “A League of Their Own” director Penny Marshall cast pop superstar Madonna in the role of dancer-turned-center fielder Mae “All the Way Mae” Mordabito. Geena Davis took on Winger’s role of Dottie instead after Winger departed.

Madonna’s involvement in “A League of Their Own” also included an original song for the film, called “This Used to Be My Playground.”

Winger said she accused Marshall of making “an Elvis film,” and left the project because she said Madonna’s involvement wasn’t what she signed up for. Winger told The Telegraph she felt Madonna and the other leading ladies didn’t train as hard as they should have to make a legitimate-looking baseball movie.

“As entertaining as [the final film] was, you don’t walk away going, ‘Wow, those women did that.’ You kind of go, ‘Is that true?’” Winger said.

Debra Winger did say that Lori Petty was the one actress who did thoroughly prepare. Geena Davis “did ok,” Winger said, adding, “I certainly don’t begrudge any of them.”

When asked to elaborate on her thoughts on Madonna’s performance, Winger just snidely told The Telegraph, “I think [her] acting career has spoken for itself.”

Leaving “A League of Their Own” was a rare choice for Winger, who said she usually doesn’t depart projects. “The studio agreed with me because it was the only time I ever collected a pay-or-play on my contract,” Winger said. “In other words, I collected my pay even though I did not play, and that’s very hard to get in a court.”