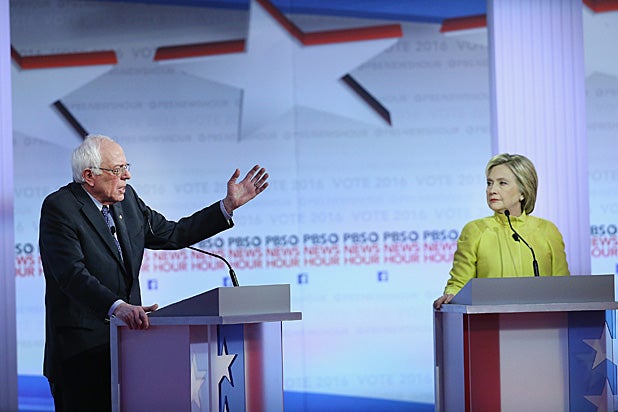 “Well, look I think that she’s been saying that for as long as I’ve known her,” Clinton said before addressing the female moderators.

“I would note, just for a historic aside, somebody told me earlier we’ve had like 200 presidential primary debates, and this is the first time there have been a majority of women on stage,” Clinton said. “So you know, we’ll take our progress wherever we can find it.”

3. Clinton, Sanders beef over healthcare
Clinton kicked off the debate by saying it’s unrealistic to start from scratch with the concept of free health care for all.

“We should level with the American people about what we can do to make sure that they get quality, affordable healthcare,” Clinton responded to Sanders suggesting a single-payer system that could provide free care for all.

2. Will campaign contributors influence your administration?
This is a hot-button issue and the Super PAC conversation was an exchange that people anticipated heading into the night.

Sanders reminded Clinton of the fact that a super PAC supports her campaign. He has argued that the fact Clinton accepting contributions from financial groups means she likely will not take on Wall Street in office.

Clinton augured that despite accepting donations in 2008, President Obama passed new regulations on the financial industry and she would do the same.

“Let’s not insult the intelligence of the American people,” Sanders countered. “People are not dumb.”

1. Sanders Brings Up Henry Kissinger
Sanders jabbed Clinton for writing in her foreign policy memoir that she took advice from Nixon-era Secretary of State Henry Kissinger.

“Count me in as somebody who will not be listening to Henry Kissinger,” Sanders said.

Also Read: Bernie Sanders Gets a Taste of Southern Hospitality From Stephen Colbert

The Twitter feedback was mixed, see the best below.

People annoyed with Sanders for the Kissinger discussion are basically like "forget learning from history guys." #DemDebate

can't wait for all the hot kissinger thinkpieces now

I can't believe Kissinger was a serious topic of discussion in this ridiculous debate. LOL #DemDebate

So I was eating dinner. Sanders clearly boned up on fopo. His dagger on Kissinger matched by Clinton's dagger on Obama & leadership.

Henry Kissinger is a war criminal responsible for the deaths of hundreds of thousands of Bangladeshis and East Timorese. Good on Bernie

#DemDebate never forget Henry Kissinger is a murderer. If you need advice though he's a great guy to ask; then do the opposite.

And in closing, Kissinger.