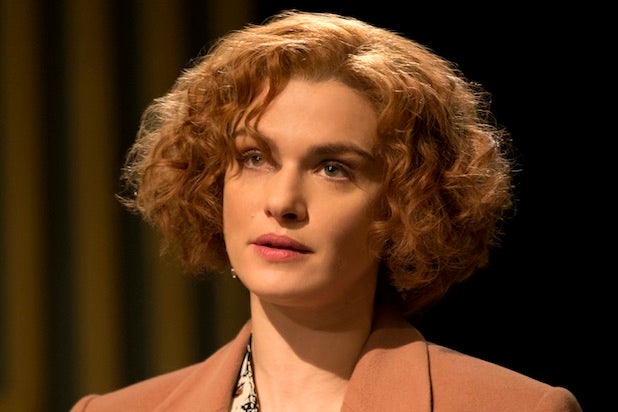 When he introduced the world premiere of his film “Denial” at the Toronto International Film Festival on Sunday night, British director Mick Jackson pointed out that one of his main characters is called a liar, a racist and a demagogue.

“Does that sound familiar?” he added with a grin. “You might think this is a hastily assembled, ripped-from-the-headlines movie, but the story goes back decades.”

So no, “Denial” has nothing to do with a current presidential candidate — but if you want to go looking for parallels, you’ll no doubt find some. Instead, it’s about a real-life trial in London in the 1990s, when American historian Deborah Lipstadt was sued for libel by David Irving for calling him a Holocaust denier in one of her books.

An excitable Rachel Weisz stars as Lipstadt, the reliably sleazy Timothy Spall is Irving and Tom Wilkinson and Andrew Scott are Lipstadt’s legal dream team. With a more-than-40-year directing career that includes “L.A. Story,” “The Bodyguard” and the T.V. movie “Temple Grandin,” Jackson is nothing if not a pro, and “Denial” is a sturdy, seamless and satisfying piece of work that was well received by the TIFF audience.

It also treads gingerly in the shadows of the Holocaust. When the action shifts to a tour of Auschwitz by Lipstadt and her legal team, the movie gets quiet, restrained and chilling; Weisz upbraids Wilkinson for not being reverential enough and declares, “respect must be paid,” and she could just as easily have been speaking for a filmmaker daunted by the prospect of putting that place on camera.

It’s odd to see a film that backs away from the horrors the year after the immersive “Son of Saul” found a new way to depict the Holocaust, but the subject is endlessly fascinating to filmmakers, and endlessly problematic.

And “Denial” knows that: At one point in the film, the boyfriend of a paralegal watches her poring over documents late at night and snaps, “The Holocaust, the Holocaust! There are other things!”

Jackson treats the subject with dignity and restraint, which robs his film of some energy but also keeps it from ever feeling exploitative. This is a courtroom drama with enormous sadness at its center, which helps compensate for the feeling that we’ve seen this kind of movie before.

The beats are sometimes too predictable as Weisz’s character must stifle her urge to confront her accuser, or to demand that her lawyers put Holocaust survivors on the stand. (It’s an act of “self-denial,” Wilkinson tells her.)

Still, tension mounts despite the familiarity; some of that tension comes from Weisz learning the befuddling intricacies of the British legal system, in which the burden of proof in a libel suit is on the defendant, and some from the enormity of the issues at stake.

The film is talky and well-mannered, which are not usually the highest of compliments. But it works — and if you want to go looking for contemporary resonance and find echoes of what Jackson described as “where we are now,” “Denial” will give you that, too.