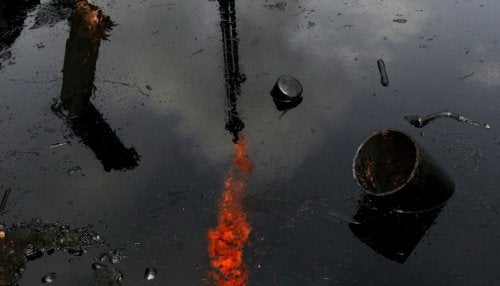 The Directors Guild of America has added its voice to the chorus of filmmakers rallying behind "Crude" director Joe Berlinger.

The DGA issued a statement on Wednesday calling on the courts to overturn a New York district court decision ordering the documentary maker to turn over 600 hours of footage from his 2009 film to Chevron.

The word of encouragement from DGA President Taylor Hackford come on the same day that Berlinger’s legal team was in court arguing for a stay of the subpoena pending an appeal to the Second Circuit Court.

Chevron hopes to use the raw film in a $27 billion class action currently winding its way through Ecuadorian courts. The suit has been brought against Chevron by some 30,000 indigenous people who live near an oil field operated on the Amazon River by Texaco, which was acquired by Chevron in 2001. They are seeking damages for a medley of illnesses they allege were caused by the company’s failure to clean up the plant.

The oil company claims the footage shows the plaintiffs’ lawyers engaging in misconduct that undermines their case.

In signaling their support for the director and claiming the court order violates his First Amendment rights, the DGA joins groups such as the Independent Documentary Association, the Writers Guild of America East, and over 20 Oscar winning fillmakers, all of whom have issued similar statements.

"The Directors Guild of America, in support of filmmaker Joe Berlinger and the First Amendment, objects to a judge’s decision that Berlinger must turn over 600 hours of raw footage from his documentary Crude: The Real Price of Oil to Chevron, for their use as defendants in the lawsuit depicted in his documentary.

"Documentary filmmakers work under the presumption that their research, sources and draft materials are protected under the First Amendment. Their work often explores sensitive subjects that might not ever reach the public eye if not for the tenacity of the filmmakers and the bravery of their sources.

"The chilling effect of this court decision will be felt throughout the documentary community, as future filmmakers will be constantly aware that their materials may be seized as evidence, and those who once might have been willing to share their point of view become wary that a documentarian cannot protect them, even if their participation is anonymous. Safeguarding the right of documentary filmmakers to protect their sources is ultimately about protecting the public’s right to know and preserving the role of investigative filmmaking in exposing the issues, educating the viewers and informing the public."