The Social Security full retirement age (FRA) in the United States is 66. Dick Wolf, who is 74 years old, does not have that in him.

Wolf, the mastermind “Law & Order” creator and modern-day godfather of the TV procedural, will have three straight nights of full primetime-programming blocks on broadcast this coming fall. That is NINE straight hours of primetime television across CBS and NBC.

On Tuesdays, Wolf’s second “FBI” spinoff, “FBI: International,” will air at 9 p.m. on CBS. That sandwiches the freshman between O.G. “FBI,” which is being promoted into the former “NCIS” time slot, and the third season of “FBI: Most Wanted.”

On Wednesdays, Wolf moves to his regular network, NBC, and Chicago. The “One Chicago” nights — “Chicago Med,” “Chicago Fire” and “Chicago P.D.” — are a well-established winner. NBC is no dummies, so they gave Wolf all of Thursday night too for the upcoming season.

On Thursdays, Wolf’s newbie “L&O” spinoff, “Law & Order: For the Defense,” will actually kick off primetime at 8 p.m. It’s a bit unusual to have a Season 1 show in that self-starter role, but all of this is a bit unusual.

Plus, the “Law & Order” franchise is anything but new, and that scheduling decision leaves “Law & Order: SVU” and Season 2 of “Law & Order: Organized Crime” in their usual time slots. 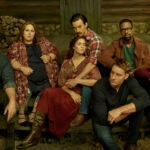 With zero comedies on its fall schedule, NBC could use all the drama it can get. And who better than Wolf?

Comedy returns to NBC’s airwaves in midseason, but that doesn’t mean Wolf is going away — or even resting on old I.P. His new docuseries, “L.A. Fire and Rescue,” following the real-life heroes of the Los Angeles County Fire Department, will debut after the calendar flips to 2022.

At this point, you might be wondering how much money Wolf has — or needs. Forbes has Wolf’s net worth at $550 million. And to answer the second question, with five kids and three divorces: a lot.