Jeffrey Katzenberg and Barry Diller both worked together in Hollywood when Diller was the CEO of Paramount and Katzenberg was head of production.

But at Fortune’s Brainstorm conference in Pasadenan on Friday, the two clearly had very different ideas of how Hollywood and the New Media interact.

Diller, now the CEO of IAC, forecast the technologies would mean “creative destruction” for traditional distributors like movie studios. Katzenberg, now the CEO of Dreamworks animation, declared the eternal union of technology and the movie business.

“There’s a 20th century notion of the convergence of Silicon Valley and Hollywood,” he said  at Fortune’s Brainstorm conference in Pasadena. "That is an Old School notion. Today the level of integration between technology and Hollywood — be it in creation, production or distribution of creative content — is ubiquitous. We’re married, for better or worse.”

Katzenberg also said at the confab that 3D TVs would appear in households by early 2010 and be usable without 3D glasses “in a handful of years.”

Katzenberg called technology “the essence of what we do” and said that if DreamWorks were a car, “then Hewlett Packard is our engine.”

The creator of that engine, HP Chairman, CEO and President Mark Hurd, echoed Katzenberg’s sentiments regarding 3D, adding that it was now all dependent on content.

“I don’t think this is an issue of the base technology,” Hurd said. “I’m on the board of a media company, NewsCorp. We need content.”

Katzenberg countered that content, as evidenced by this year’s slate of 3D movies, is at a higher level than he could have imagined.

“There is a wave of extraordinary product coming that is taking what used to be a goofy gimmick and turned it into a great platform for storytelling,” he said. “It’s a form of immersion in storytelling that I think changes the movie theater experience.”

Despite 3D’s looming invasion of the home, Katzenberg does not believe it can replace the experience of seeing a movie in a theater.

“Going to a movie theater in terms of the quality is like going to a live sporting event versus seeing it on a TV at home,” he said. “There is no comparison. You go to Lakers game — be there in the auditorium with 18, 20,000 fans — it’s not analogous to the home.”

Not afraid to compliment his own product, Katzenberg noted few competitors to Dreamworks’ animated films among those public experiences.

“There is no out-of-home experience that is better,” he said. “The ability to deliver a high quality dependable product, particularly in our case to families, is playing really well.”

Similarly, he trumpeted his company’s sustained success in the DVD market, which stands in contrast to the industry trend.

“Our movies are not a movie purchase but a toy purchase,” Katzenberg said. “It is a DVD which your kids will watch 50 or 100 times.”

Still, the focus remained the two CEOs’ collaboration and their mutual need of the other for success.

“Every aspect, every facet of our process of creating and producing digital images, which are getting more and more complex, is dependent upon not just the hardware that we get from HP but the [information technology] function,” Katzenberg said. “I look at what Google is to search, HP has become that to IT.”

Describing the Internet as a system with three different revenue streams, IAC chairman Barry Diller disputed the theory that the web is a free business environment and warned that “creative destruction” lay ahead for traditional distributors like televisions stations and movie studios. 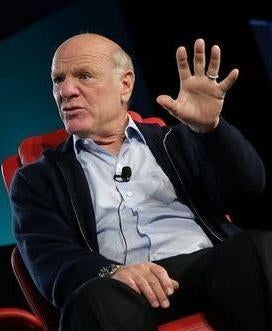 Diller, whose company has both retail sites like Expedia and the original content site The Daily Beast, spoke at the Fortune Brainstorm conference on Friday in Pasadena.

As for where the new revenue streams come from, the former head of both Paramount and Fox identified advertising, subscription and pure pay as the three sources.

However, he clarified that when it comes to advertising, traditional advertising was already a habit on its way out.

Part of the evolution of the Internet will be different kinds of advertising, Diller said, citing the example of a Bottega Veneta ad on IAC’s TheDailyBeast.com which was “more like the art advertising you see in Vanity Fair books.”

However, unlike the agglomeration that occurred among the studios, Diller predicted the reverse – the decline of traditional distributors. Since anyone has the ability to publish content onto the web, Diller questioned how such distributors could continue to survive.

Diller conceded he could be wrong were “someone to come along and squeeze the pipe, as it was by distributors of the past, and be the toll bridge taker.” But he quickly added that he did not think that would happen.