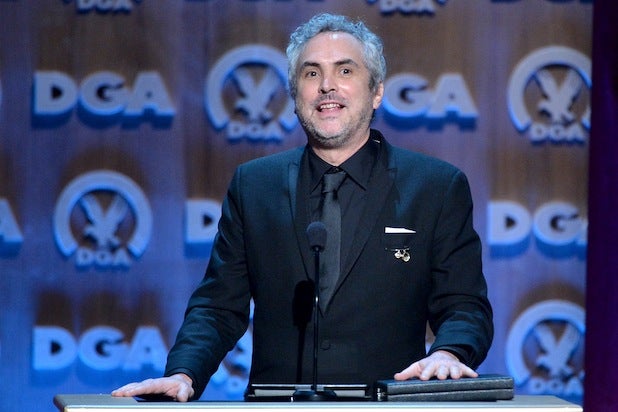 Alfonso Cuaron’s “Gravity” won a significant victory in its tight race with Steve McQueen’s “12 Years a Slave” and David O. Russell’s “American Hustle” on Saturday, as Cuaron was named the year’s best director at the Directors Guild of America Awards.

Cuaron went into the show a slight favorite to win the award for his visionary blockbuster, the most technically challenging of the nominees and by far the biggest moneymaker.

Because the DGA Award is one of the most reliable Oscar predictors among guild awards, the win was an important way for “Gravity” to show that it isn’t simply a favorite of the below-the-line voters who appreciate its groundbreaking technical mastery.

Last weekend, “Gravity” tied with “12 Years a Slave” in voting by the Producers Guild of America, while “American Hustle” won the top film prize from the Screen Actors Guild, the SAG ensemble award.

Only seven times in the 65-year existence of the DGA Awards has its winner not gone on to win the Oscar for Best Director, and only 13 times has the DGA-winning film not won Best Picture. But last year was one of the rare times the DGA and AMPAS didn’t match with directors’ awards, because DGA winner Ben Affleck wasn’t even nominated by the Academy – although his movie, “Argo,” was named Best Picture.

And this year, in a departure from most recent years, no film has been able to gain a significant advantage in the race through victories at the major Hollywood guild ceremonies.

“Gravity” isn’t even nominated at next weekend’s Writers Guild Awards, where “12 Years a Slave” is ineligible – so “American Hustle” figures to gain a boost on that night, keeping the three-way race tight all the way to Oscar night.

Jehane Noujaim won the documentary directing award for “The Square,” winning in a category that also included two other Oscar nominees, “The Act of Killing” and “Cutie and the Boxer.”

In the television categories, the comedy series prize went to Beth McCarthy-Miller for the final episode of “30 Rock” and the drama series award to Vince Gilligan for the “Breaking Bad” finale. Steven Soderbergh won yet another award for his HBO movie “Behind the Candelabra.”

The award to Soderbergh was actually his second of the night, though it was the only one he thought he was up for. Midway through the show, current DGA president Paris Barclay was joined by past presidents Taylor Hackford and Michael Apted to announce a surprise: The Robert B. Aldrich Award, which is given for service to the guild, would go to Soderbergh, who has spent years as an officer and committee members at the DGA.

They didn’t announce the award ahead of time, they said, because Soderbergh would have declined it if they had told him about it.

In other honorary awards, the 2014 Diversity Award went to Shonda Rhimes and Betsy Beers of Shondaland. Lee Blaine received the 2014 Frank Capra Achievement Award, which goes to an assistant director or unit production manager, and Vince DeDario received the Franklin J. Schaffner Achievement Award, which goes to an associate director or stage manager.