The circumstances of Dick Cook’s sudden ouster from the Walt Disney Company  continues to preoccupy Hollywood as many wonder both privately and publicly: Who made a misstep?

Was it Bob Iger? Or Dick Cook? 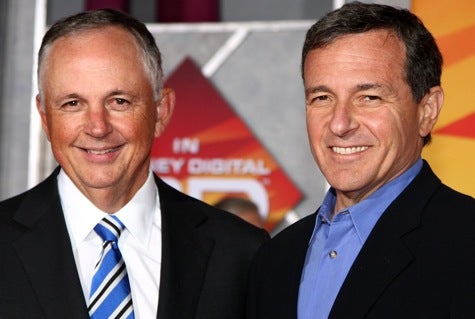 No one considers it a normal state of affairs when the head of a studio is summarily dismissed — “effective immediately,” said the statement — on a Friday afternoon after 38 years as a company man.

“I was shocked. Saddened,” said uber-producer Jerry Bruckheimer on Monday, who got the call on Friday from both Cook and Iger. “Neither one of them gave me a reason.”

Could Cook have done something to require his immediate removal? Or did Iger make an error in jettisoning an executive with deep relationships around the town and affection within the halls of Mickey Mouse?

Within the studio, executives are still reeling. Said one senior executive at the studio who spoke on condition of anonymity: “I didn’t see it coming. And I don’t think (Cook) did.” Said another executive who works closely with Disney: “People are depressed and scared. They feel like they don’t know what’s next. “

Just last week, people who work closely with Cook were planning meetings about the upcoming Oscar campaigns. Oren Aviv — who runs Walt Disney Studios motion picture production and is close to Cook — was apparently on his way out the door on Friday when he found out the news. Like others who worked closely with Cook, his future at the studio depends significantly on who takes his former boss’ place.

That’s part of what strikes many as awry. Why would Iger dismiss a well-liked, established studio presence before deciding, or announcing, his replacement?

By dismissing Cook without having a replacement at hand, several observers said, Iger is sending a message that the studio is broken. But to outward appearances, it does not seem to be.

If Disney has not had its strongest year in 2009, its slate in 2010 is filled with tentpoles, including “The Sorcerer’s Apprentice" and “Toy Story 3.”

And while Cook had announced the making of “Pirates of the Caribbean 4,” Bruckheimer confirmed that that deal is not concluded, and key talent like Johnny Depp — who showed up at Cook’s D23 conference earlier this month in full pirate regalia — is not secured. “We are working on the script,” said the producer, who is negotiating with Rob Marshall to direct the movie.

Perhaps Iger wants to take the studio in a new direction. Clearly he has signalled a desire to break new creative and content-driven ground in buying Pixar, sealing a distribution deal with DreamWorks and most recently with buying Marvel.

But however old school, Cook has undeniably contributed significantly to the studio’s success in recent years. And his relationships with heavyweight talent like Bruckheimer, Depp and Scott Rudin — all of whom rose to defend him — must have weighed on Iger’s mind as he decided.

What has emerged from the fog of speculation is a sense of slow erosion in the relationship between the two men. Cook has been regarded as an executive who played things close to the vest, perhaps too much so for Iger’s taste.

“There was a fissure between these two guys,” said Bruckheimer. “There was something going on.”

The L.A. Times gave an example of the tension that arose from this recently, when Cook declined to publicize the names of the stars who would wow the crowds at this month’s D23 convention — including Depp, Miley Cyrus and Robert Zemeckis.

“Bob seems to be a guy who likes open communication,” said the executive who works with both. “Dick likes to hold things close to his chest. Maybe that, at the end of the day, wasn’t addressed.”

And here was another point of view: “Iger’s a big city, flashy kind of guy. His first job in business was as weatherman, an on-air personality. Dick comes from Bakersfield. These are completely different guys. Dick’s an insider. Iger’s not."

Still, of a half-dozen executives who worked with both, no one could point to a single incident (or at least not yet) that signalled an open break.

Some compared Cook’s abrupt dismissal with the send-off given Paramount’s Sherry Lansing after a comparable period in her position running the studio. (They named a theater after her; and Lansing’s slates performed less well over time than Cook’s.)

Said one executive who does frequent business with the studio: “It doesn’t answer the question of what he did wrong in the first place vis a vis what other chairmen are doing at other studios. Iger had to be really, really sure he didn’t want this relationship to go on to make this choice before ‘Pirates 4’ was locked and loaded.”

Three days after this bombshell, people have reached a few conclusions: Cook, informed on Tuesday that he was to be pushed aside, did not know this was coming.

And it seems that no single failure of a movie — not “Shopaholic,” not the remake of “Witch Mountain,” not the high cost of “G-Force” — was enough to torpedo his career.

As the dust settles, what’s clear is that short of revealing that Cook committed some major blunder, Iger needs to prove to Hollywood that his choice for a replacement is decisive — and that replacement needs to makes the reason for his decision clear.