Wall Street has already embraced the news that Bob Iger has returned as Disney’s CEO, replacing Bob Chapek’s short and tumultuous reign: Shares in the entertainment giant climbed 10% in premarket trading on Monday, to $101.02.

Chapek, the former Disney parks chief who himself replaced Iger as CEO less than two years ago, has struggled during his brief tenure amid COVID pressures, economic issues and self-inflicted management wounds — and Disney’s shaky revenue picture has driven its stock price down 41% since the start of the year.

The company announced a $1.47 billion loss from its streaming business in the most recent quarter, double the amount from a year earlier, and Chapek admitted that its streaming operation would not hit a September 2024 profitability target if there was a recession or other economic downturn. 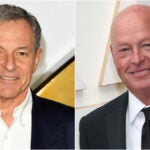 Iger, a famously well-liked CEO, will return for two more years to the company that he previously led for 15 years, from 2005 to 2020. During that time, he oversaw the acquisitions of Pixar, Marvel Studios, Lucasfilm and 21st Century Fox.

He had also doubled the company’s revenues from $32 billion to $70 billion through his tenure.

Chapek became CEO in February 2020 after previously serving as Chairman of Parks and Resorts and, before that, president of Consumer Products. His two years were marked by multiple missteps, including a poorly handled lawsuit from Scarlett Johansson over her salary tied to the streaming release of “Black Widow.” Chapek also initially chose to stay mum about Florida’s “Don’t Say Gay” bill, drawing the ire of numerous employees.

Most recently, Chapek announced impending job cuts and a hiring freeze for Disney in 2023. Chapek, who earned $32 million in 2021, had his contract extended in July for another three years with a guaranteed minimum payout of $22.5 million.