Disneynature’s “See ‘OCEANS,’ Save Oceans” campaign will protect more than 35,000 acres of coral reef in the Bahamas, the company announced Thursday.

Thanks to moviegoers who saw the film “Oceans” in its opening week, Disneynature will help establish new marine protected areas through the the Nature Conservancy’s Adopt a Coral Reef program. 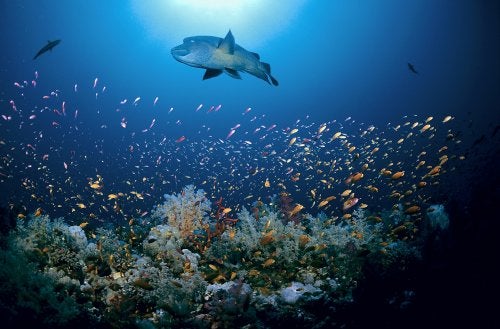 At 55 square miles, this protected area of coral reefs will be almost two and a half times the size of Manhattan or the equivalent of more than 412 Disneylands, supporting the expansion of the Westside National Park of Andros.

The 700 islands that comprise The Bahamas contain miles of vital coral reefs, which provide shelter, nurseries and feeding grounds for hundreds of marine species, including dolphins, sea turtles and a wide range of fish.

Scientists estimate that the coral reefs of the Caribbean could be gone in 50 years without a network of well-managed marine protected areas.

“We’re excited to once again collaborate with the Nature Conservancy on an initiative that takes the impact of Disneynature’s storytelling to an entirely new level,” Alan Bergman, president of the Walt Disney Studios, said in a statement. “The health of our oceans is absolutely vital to the well-being of our planet, and thanks to the supporters of Disneynature’s motion picture ‘Oceans,’ this investment in marine conservation will help ensure critical aquatic environments will thrive for future generations.”

This is the second consecutive year that Disneynature has collaborated with The Nature Conservancy to protect the planet. Last year, Disney offered to plant a tree in honor of every moviegoer who saw “Earth” in the first week of release. This resulted in the planting of 2.7 million trees in Brazil’s Atlantic Forest through the Nature Conservancy’s Plant a Billion Trees campaign.