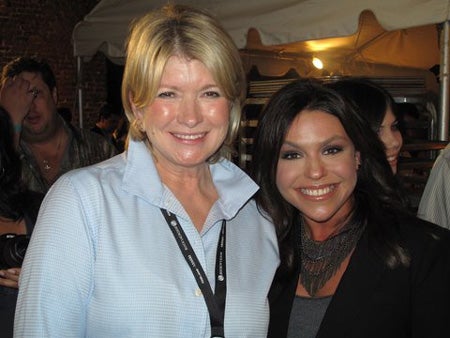 In terms of domestic diva rivalries, at least on paper, it’s on par with the world’s other made-for-media battles, like Yankees and Red Sox, or Oprah and Tyra, or O’Reilly and Olbermann.

According to Martha Stewart, here’s how it went down:

According to her Twitter feed, Stewart also spent part of the weekend attending an East Hampton screening of Brian Koppelman’s “Solitary Man” and “moving my canaries.”

Tweets aside, the competition for Madison Avenue’s ad pages between the pair’s magazines is heating up – with Ray closing the gap.

Through September, Martha Stewart Living is down 29 percent in ad pages to roughly 652, according to the latest ad data released by the Publishers Information Bureau. Everyday with Rachael Ray, with about 462 pages sold, is off 8.8 percent during the first nine month’s of the year – meaning the split between the two magazines is less than 200 ad pages.