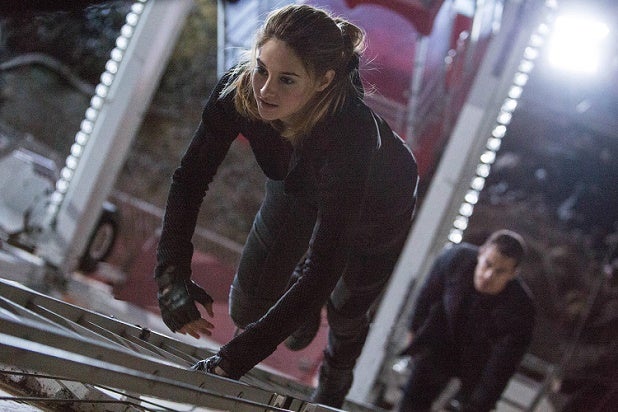 “Divergent” delivered in its first day at the North American box office.

Lionsgate’s big-screen adaptation of Veronica Roth’s young-adult bestseller rolled up $22.8 million Friday and is on pace for a three-day total that could hit $55 million. That’s enough for a runaway weekend win and more importantly, to successfully launch the studio’s latest teen franchise, following “Twilight” and “The Hunger Games.”

On Friday, Lionsgate gave a greenlight to “Insurgent,” the second film in the series, which will arrive next year on March 20. The third installment, “Allegiant,” is scheduled to debut on March 18, 2016.

The first-day total for the Shailene Woodley-Theo James sci-fi adventure was impressive, but not close to the nearly $36 million that “Twilight”ran up on its first day in November of 2008, on its way to a $69 million opening weekend. And it was nowhere near the $67 million opening day that “The Hunger Games” posted in 2012, on its way to a March record $152.5 million first weekend.

The PG-13-rated “Divergent” targeted the young women that have made Roth book’s bestsellers, and it was dominating. The critics have been rough on the Neil Burger-directed adventure that co-stars Kate Winslet, Miles Teller, Ashley Judd and Jai Courtney. But first night audiences — 59 percent female and evenly split between those over and under 25 years of age — gave it an “A” CinemaScore (“A+” from those under 18). Nearly $5 million from Thursday night screenings were included in the Friday figure.

The weekend’s only other wide opener, Disney’s “Muppets Most Wanted,” ran second Friday with $4.6 million. That projects to a soft $17 million weekend for the PG-rated family film starring Tina Fey, Ricky Gervais and Ty Burrell, which the studios and analysts had pegged for $2o million.

The low-budget “God’s Not Dead,” about a college student who sets out to prove God’s existence, was in 780 theaters and ran a surprise third Friday with $2.8 million for Freestyle Releasing. That translates to a an impressive $8 million for the weekend, though it will likely be overtaken by last week’s No. 1 movie, DreamWorks Animation’s “Mr. Peabody & Sherman,” which did $2.7 million Friday and is looking at $10.8 million for the three days.

“The Grand Budapest Hotel” continues to impress. Fox Searchlight expanded Wes Anderson‘s ensemble comedy into 304 theaters, up from 66 last week, and it brought in $1.8 million. That’s a $6,210 per-screen average – better than any movie in the market, including the $5,805 of “Divergent, which was in a market-high 3,936 theaters, including 346 Imax sites.

On its current pace, “Grand Budapest” will finish the weekend with $6.3 million, to raise its total after three weeks to more than $12 million, and wind up seventh, behind “300: Rise of an Empire” and “Need for Speed.”

Also read: Why ‘Divergent’ Is Conquering the U.S. Box Office Before Overseas

Warner Bros.’ R-rated sword-and-sandals brought in $2.4 million Friday and should come close to $8 million in its third weekend. It’s domestic total is up to $87 million and it’s added another $158 million from abroad.

DreamWorks hot-car video game adaptation starring Aaron Paul of TV’s “Breaking Bad” brought in $2.2 million Friday, a tough 67 percent drop from its opening last week. It should finish around $7 million, which would bring its domestic to nearly $30 million.

Justin Bateman’s directorial debut “Bad Words” expanded from six to 87 theaters and brought in about $141,000 for Focus Features, an OK $1,620 per-screen average for the R-rated spelling bee comedy.

Lars von Trier‘s “Nymphomaniac: Volume 1” debuted on 24 screens and brought in about $53,000 for Magnolia Pictures. That’s a pretty good $2,195 per-screen average for the unrated Danish sex drama, which has been available on demand for since March 7.

The crowd-funded comedy mystery “Veronica Mars” added 56 theaters but took a major 86 percent tumble from its first weekend, and took in just $139,000 for Warner Bros.