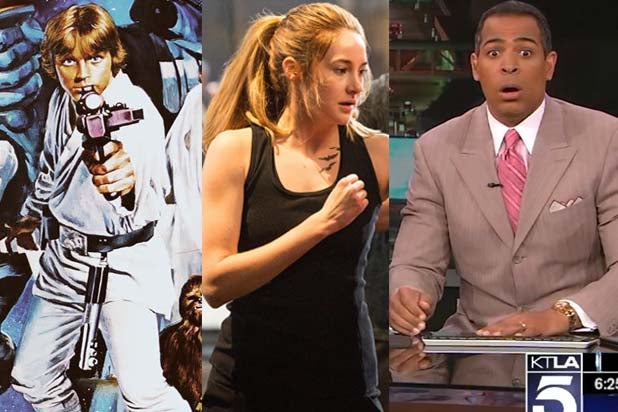 How ‘Divergent’s’ Shailene Woodley Used a Survivalist Weekend to Become Tris
Plus, if this YA adaptation is expected to be a hit, why is Lionsgate’s stock sliding?

Head-Scratcher: Deadline’s Plea for Mel Gibson Omits TV Show Tie Between Actor, Journalist
Allison Hope Weiner did not mention that she hosts an online TV show for a company that is quietly owned by Gibson.

‘Frozen’ Surpasses ‘Jurassic Park,’ ‘Star Wars: Episode I’ at All-Time Box Office
With $1.03 billion at global box office, dinosaurs and Yoda are no match for the Disney hit.

‘Walking Dead’ Shocker: Did They Have to Do That?
Death seems to be the zombie hit’s only trick.

‘Machete Kills’ Producers Slap Texas With Discrimination Lawsuit
The company behind the Danny Trejo-starring schlockfest says that the state’s film commission denied it grants because the film glorified the Mexican federale.

‘The Twivergent Games: The Saga: Bloody Dawn – Part 1’ Trailer: The Hottest YA Couples Prepare for Battle (Video)
“Love… is a battlefield” in TheWrap’s first original trailer paying tribute to the popular genre.

Earthquake Interrupts KTLA’s Live Broadcast: Anchors Dive Under Desk (Video)
This is not a drill – but it is what viral videos are made of.

6 Craziest Malaysia Flight Conspiracy Theories – From Alien Abductions to Courtney Love’s Reasoning (Video)
Leave it to the public to help “solve” the case that 26 countries can’t seem to crack.