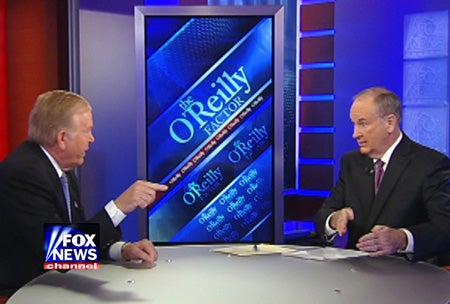 Lou Dobbs appeared on cable news Monday for the first time since his abrupt exit from CNN last week, on the network some people still think he’ll wind up working for: Fox News.

Dobbs gave Bill O’Reilly the exclusive interview, which will be broadcast at 8 and replayed at 11.

During the interview, Dobbs hinted that CNN’s feelings about his program changed once Barack Obama was elected. ”Well, I don’t know whether that was the distinction that triggered any sort of response or difference in perspective on the part of CNN’s management,” Dobbs told O’Reilly, “but it is the only difference between the way I’m — I was conducting myself under this administration and the previous administration.”

Below, some other excerpts.

Dobbs on his next move:

Dobbs on CNN going in a “different direction”:

“You know, I discern more of a difference between then, which was under the Bush administration whom I was criticizing, and now, when it is the Obama administration and an entirely different tone was taken, not so much in the case of CNN management, certainly, because there’s no … my contract was very explicit.  I had absolute editorial control.  What I reported is what I chose to report.”

“The only issue that came up in the last 90 days of my employment there was (CNN chief Jon Klein) and I had talked about the issue of opinion itself and advocacy journalism, and he wanted to take the — the network in a different direction, and I quite understood that and tried to accommodate him, though.”

“What I heard very directly was that they had decided to take CNN in a direction in which advocacy journalism would not — wouldn’t be a part of it.”

“Their ratings are objectively, without question, as you suggest, lower than they should be, than they’d been.  By the way, I was partly to blame for that, because my broadcast was in that line-up.  They’re making choices now trying, obviously, to change that direction.”