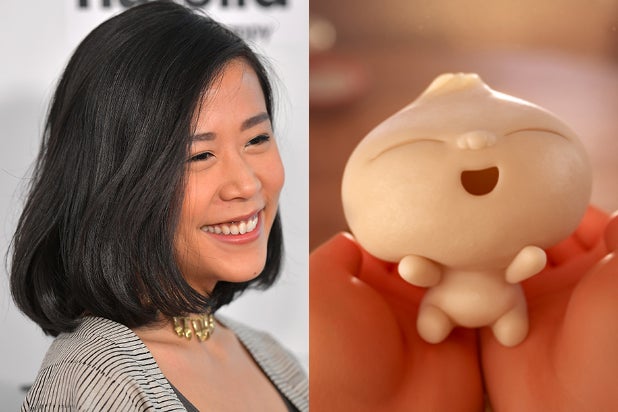 A version of this story about Domee Shi appeared in the Down to the Wire issue of TheWrap’s Oscar magazine.

“Bao” is the 15th Pixar short nominated for an Oscar, but it’s the first of the hugely successful animation company’s shorts to be directed by a woman. And it comes at a major crossroads for Pixar, as stories have poured out from former female employees describing the company as a “boys club” under departed founder John Lasseter.

In the midst of this scrutiny comes Domee Shi, the Chinese-Canadian director of “Bao,” who could become only the fourth Asian animation director ever to win an Oscar, and the first Asian woman to do so. Shi, who worked as a storyboard artist on “Inside Out,” “Incredibles 2” and the upcoming “Toy Story 4,” created “Bao” under new Pixar head Pete Docter.

The short continues the cultural diversity of recent Pixar films like the short” Sanjay’s Super Team” and the feature “Coco,” telling the story of a Chinese mother who takes care of a bao, or dumpling, that comes to life. As it turns out, her fantasy is actually a dream, a manifestation of the internal struggle of letting go of a son who has moved out and is now dating a white woman.

“This short was inspired by my relationship with my mom, who always treated me like her precious little dumpling,” Shi said. “I wanted to explore the relationship between an overprotective parent and a child, and I love food and watching shows like ‘Top Chef.’ You see all the effort and love and consideration put into making that food, and I wanted to see that in animated form.”

Shi added her own details from growing up in a Chinese immigrant family, most notably a toilet paper roll that sits on the dining room table.

Also Read: 'Cold War' Director Pawel Pawlikowski Is a First-Time Nominee Who Already Has an Oscar at Home

“That’s something that not just a lot of Asian households, but I think a lot of immigrant households, have,” she said. “Toilet paper is a really practical item to use for a lot of things around the house, so there would always be some on the table. There were some non-Asian animators asking why we had that there.”

Those details rang a bell with many Asian moviegoers who were among the millions who saw “Bao” when it was attached to the release of “Incredibles 2.” Shi applied Pixar’s usual devotion to detail to re-create the sensory memories — and, crucially, the tastes — of her childhood in an immigrant family.

“I wanted to not just make random dishes, but dishes that my parents cooked when I was growing up,” she said.”Green beans, Szechuan fish — just creating this feeling of an environment that’s based in a specific reality, because the characters and the story are so cartoony.

To read more of TheWrap’s Down to the Wire Oscar magazine, click here.