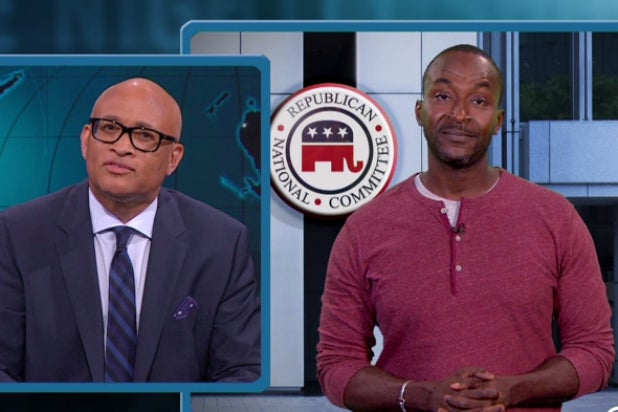 “Nightly Show” contributor Mike Yard informed his boss Larry Wilmore that the black Republican vote is officially locked up, and it’s all going to a surprising candidate: Donald Trump.

“This dude is ’90s hip-hop all day,” Yard explained to the stunned Comedy Central host. “Trump likes gold, he rolls deep, he had his own vodka, he’s got his own cologne, he’s got tons of baby mamas, he’s had court appearances, and he’s dealt with bankruptcies.”

“This dude is even jacking beats!” the political correspondent declared, referring to Trump’s unauthorized use of a Neil Young tune during the mogul’s candidacy declaration speech.

Yard even called Trump’s giving out Senator Lindsey Graham’s cell phone number publicly “straight up gangsta,” concluding that based on all his beefs, the former “Celebrity Apprentice” host is “the 50 Cent of the Republican Party.”

On second thought, Yard decided that Trump was a bit more like Macklemore. That makes Hillary Clinton Suge Knight, and Macklemore is not beating Suge Knight.