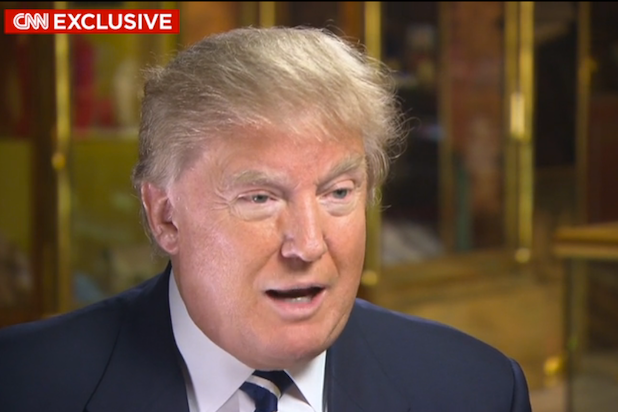 Donald Trump can’t guarantee that all his workers have legal status in the United States, he said Wednesday in an interview with CNN’s Anderson Cooper. The Republican presidential hopeful also warned that if he ever discovered any illegal immigrants working for him, he “would get rid of them immediately.”

In excerpts from a wide-ranging interview released in advance of Wednesday’s “Anderson Cooper 360,” the real estate mogul answered questions about a recent Washington Post report that illegal immigrants have been employed at a Trump hotel construction site in Washington, D.C.

“We have gone out of our way to make sure that everybody in that building is legal,” Trump said. “I wish they would give us some names — we would get them out immediately.”

Trump has faced a national backlash after making controversial statements about illegal immigrants from Mexico. During his presidential announcement last month, the former reality TV host that said some Mexican immigrants were “rapists.”

Trump also addressed a recent controversial tweet from earlier this week. As TheWrap first reported, Trump retweeted (and later deleted) a message that said, “#JebBush has to like the Mexican Illegals because of his wife.”

Trump apologized, but said he had never authorized that retweet.

Trump has been making the news rounds. Earlier on Wednesday, Trump told NBC News’ Katy Tur that he believes he could still win the Hispanic vote.

“I have a great relationship with the Mexican people,” Trump said. “They love me. I love them. And I’ll tell you something: If I get the nomination, I’ll win the Latino vote.”

He also took a shot at Democratic rival Hillary Clinton after the former secretary of state told CNN she was “disappointed” with the mogul’s comments about Mexican immigrants.

In a statement sent to Business Insider, Trump slammed Clinton’s State Department record and her views on immigration policy.

“Hillary Clinton ‎was the worst secretary of state in the history of the United States. On top of that, she is extremely bad on illegal immigration,” Trump said. “Despite anything you may hear to the contrary, I do not think she is electable.”