The rise of Donald Trump has stunned almost everyone in the media and political establishment — except for a TV executive who can take more credit for Trump’s media success than almost anyone:

Zucker has given Trump so much play on his network — sometimes airing Trump rallies end to end —  that it has shocked some colleagues and media observers. For the once-lagging network, the Trump play has paid off wildly: Its ratings have skyrocketed this election cycle.

As Trump prepares for yet another appearance on CNN — on Thursday’s Republican debate — the symbiotic relationship between the two is a reminder that Trump and Zucker have done this dance before, when Zucker was running NBC and Trump’s “The Apprentice” became a hit for the once-struggling network. 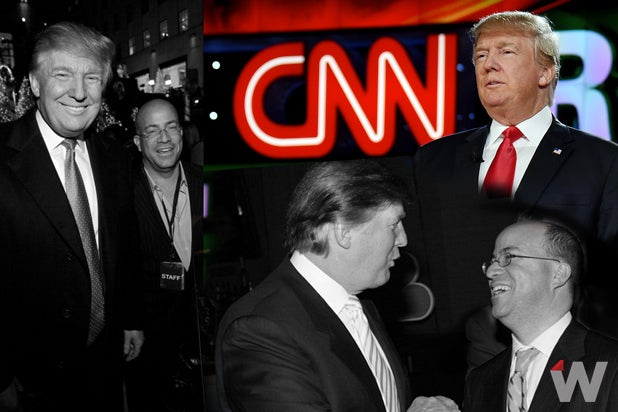 “It does so happen that Jeff Zucker was in positions during the career of Donald Trump where he had the opportunity to use Donald Trump to his advantage on the air, ” Robert Thompson, Director of Belier Center for Television & Popular Culture at Syracuse University’s Newhouse School, told TheWrap.

“‘The Apprentice’ was very good for NBC,” he noted. “It fashioned and reshaped Donald Trump for a new audience, many of whom didn’t even know who he was when that show started…  Now Zucker is at CNN and, once again, seems to be using Donald Trump to both of their benefits.”

This time, however, the stakes are much higher: The presidency. They are especially high for many of Zucker’s colleagues in the news and entertainment industries who consider Trump a bigoted blowhard.

“I’m struggling with it,” said one longtime friend, speaking on condition of anonymity.

Privately, friends of Zucker suggest that he is both aware of his unusual role in Trump’s rise, and reveling in the ratings success.

Zucker declined to comment for this story, but discussed the issue in a public chat with Buzzfeed editor Ben Smith late last year.

Smith:  Do you feel like you’re giving this guy who is running a really demagogue campaign a huge platform?

Zucker: There have been people who have asked about the amount of coverage that Trump gets [on CNN]. And you know, I don’t think it’s our role to editorialize the way you are in asking me the question.

Smith: Do you think it’s editorializing to call him a demagogue? Or a bigot?

CNN ended 2015 winning the key demo of adults age 25-54 in both September and December. Both of those months featured GOP debates that included Trump.

CNN’s September debate in Simi Valley was the most-watched program ever on the network, averaging 23.1 million total viewers. CNN’s GOP debates represent two of the Top 3 non-sports cable telecasts on record (back to 1993) in total viewers.

CNN also started off 2016 with across-the-board growth. It was up 40 percent in prime time total viewers compared, to January 2015.

CNN has been “especially hooked” on covering Trump, the Wall Street Journal recently said. As the candidate has feuded with the conservative Fox News network, Trump has favored middle-of-the road CNN over the liberal MSNBC.

On the night Trump boycotted a Republican debate in Iowa cohosted by Megyn Kelly, he granted a lengthy interview to CNN reporter Brianna Keilar on his private plane.

A CNN executive said Trump was on its air so much in part because other Republican candidates turn down its invitations.

“We’ve asked for Ted Cruz and Rubio and Jeb, all the time,” said the executive. “They were running in a ‘Fox primary,’ so they thought they had to play to conservative voters and they didn’t come on CNN much at all. And I never ever understood this at all.”

The Cruz and Rubio campaigns did not respond to requests for comment. A Fox insider countered that those candidates preferred their network because its audience is considerably larger.

Zucker’s history with Trump goes back more than a decade. In 2003 Zucker was in charge of NBC Entertainment, and had been sent to Los Angeles by his brass to find a reality show to vie with “Survivor” on CBS and “American Idol” on Fox.

He found it in “The Apprentice.”

“I wanted the show immediately and I wanted it for two reasons,” Zucker told an audience at Westphal College in 2012. “One, I was a huge fan of ‘Survivor,’ and so I understood the concept. And second, I understood who and what Donald Trump was, because I was from New York, and I understood that he was just a one-man wrecking publicity machine.”

Zucker greenlit the show, which was an immediate hit, and led to 14 seasons of “The Apprentice” and “Celebrity Apprentice.”

“That’s the legacy part that I play in furthering Donald Trump’s career,” Zucker said. “I have no regrets about ‘The Apprentice’ or any of that, it was absolutely the right decision.”

He added: “There is no question that ‘The Apprentice’ made Trump a bigger celebrity than he already was.”

Zucker seems to turn to Trump when he’s in need of a ratings spike, even attempting to televise his wedding back in 2005.

“I was actually surprised that Jeff Zucker didn’t make me do it,” Trump told Digital Spy back in 2005. “They could’ve done very well on that wedding.”

Trump has been vocal about Zucker’s network throughout the election cycle, and even went on Fox News to praise CNN in December.

After the Kelly feud, Trump went on CNN to defend himself, telling Jake Tapper that only a “sick person” would interpret his comments on her “blood” as a reference to Kelly menstruating. He said he didn’t owe Kelly an apology.

Trump also had a minor spat with “New Day” co-host Chris Cuomo, but that argument was eventually deemed a “bromance” by the Independent Journal.

“I like you, and I like your treatment, and I do think you treat me fair,” Trump told Cuomo.