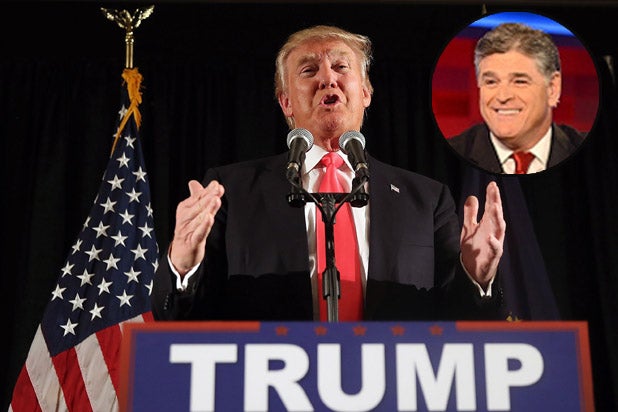 Despite repeated fallout and angry altercations since, Trump claims that he and Fox News are now at peace.

“We’re not re-litigating the Fox issue, but everything now is good with Fox from your end. I heard you the other night say so,” host Sean Hannity said.

“That’s true,” the Republican candidate confirmed, before quickly moving on to another topic.

Also Read: Donald Trump vs. Fox News Debate: Did Trump Win by Not Showing Up?

“Hannity” marked Trump’s first Fox News appearance since losing the Iowa caucuses to Texas Sen. Ted Cruz Monday night, and the former real estate mogul went on to address the fact that some people thought missing the Fox News debate in such in such dramatic fashion on Jan. 28 might have be a “positive” for his opponents.

“But actually, I raised, as you know, $6 million for the vets by not doing the debate,” Trump said, referring to his alternate fund-raiser for military veterans timed against the Fox News candidates’ debate. “So I’m really happy about that. To me it was very important.”

“I think I would have done probably a little bit better in Iowa had I not gone out and wanted to do that event for the vets. But I’m very happy with second place finish in Iowa,” he continued.

“Whereas, as you know, Ted Cruz spent a lot of money there, and so did just about everybody else … people said, oh, that was a disappointing evening for Donald Trump. But Marco Rubio — good guy, by the way — came in third, and they’re saying he had this unbelievable evening,” he added.

Trump is now looking forward to Tuesday’s primary in New Hampshire, where he’s leading by a wide margin in the polls. “I love the place, and I think I’m going to do great here,” he said. “It’s a very natural fit.”

Hannity also asked why Trump’s political advisers had told him not to go to Iowa: “What was that all about?”

“Well, they all said, don’t go to Iowa, [it] wouldn’t be right for you, wouldn’t probably play too well in Iowa,” Trump replied. “And I said, you know what? I want to do it anyway. And I started off in like last place, and within a couple of months I was in first place, or almost first place I believe. And we ended up in second place, and I’m really glad that I did it.”