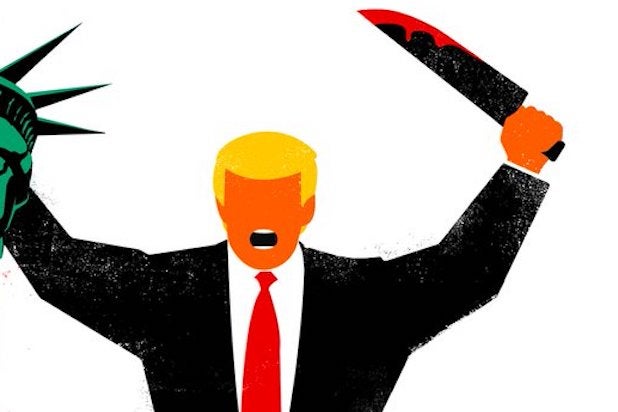 Give me your tired, your poor, your de-nogginized…

German publication Der Spiegel is making waves with its new cover, which depicts newly minted American president Donald Trump with Lady Liberty’s severed head in one hand, and a bloody knife in the other.

The coverline for the issue reads “America First,” a slogan employed by Trump to describe his administration’s foreign policy.

A note from the issue declares, “There is a power vacuum in many ministries because old employees have had to leave, but new ones have not yet started. How Trump’s inner circles look and function, how great the uncertainty among the government officials is, describes the title story.”

Perhaps not surprisingly, the striking cover has received its share of attention on social media.

“Wow, @DerSPIEGEL and The @NewYorker really go for the jugular,” noted one observer, referencing a New Yorker cover depicting the Statue of Liberty’s torch snuffed out.

“To cut it short: @DerSPIEGEL nails it,” another enthused.

“Der Spiegel demonstrates that a cartoon can be worth 1000 words,” yet another person offered.

“A glimpse of how #Europe sees what’s going in #America under #Trump,” went another observation.

This isn’t the first time that Der Spiegel has tackled the new Leader of the Free World on its cover. After Trump won the election in November, the publication published a cover depicting Trump’s head as a meteor hurtling toward the Earth, with the coverline “Das Ende Der Welt,” or “The End of the World.”

Wow, @DerSPIEGEL and The @NewYorker really go for the jugular pic.twitter.com/we3c8s8Opg

To cut it short: @DerSPIEGEL nails it. pic.twitter.com/kJsaZjpsEs

Der Spiegel demonstrates that a cartoon can be worth 1000 words. pic.twitter.com/dROukoH8U3

#AmericaFirst A glimpse of how #Europe sees what’s going in #America under #Trump. The new @DerSPIEGEL cover by @edelstudio. pic.twitter.com/BVo85cQV4z