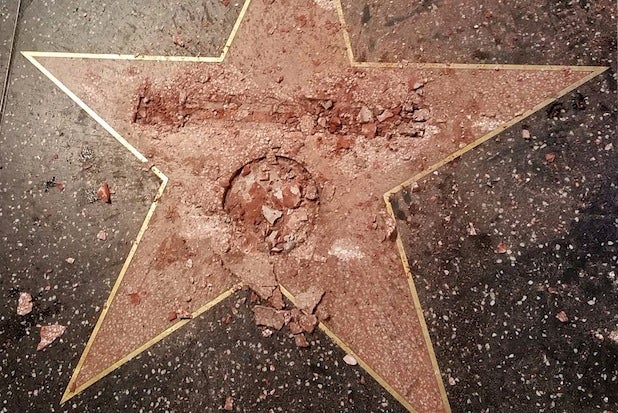 Celebrity gavel banger Greg Mathis was approached by TMZ on Wednesday, hours after a vandal destroyed Trump’s star on the Hollywood Walk of Fame, and was asked about his thoughts on the incident.

Mathis recommended justice for the perpetrator, mixed with mercy.

Wait, mercy? No, make that accolades.

“It is malicious destruction of property.” Mathis opined. “He should get a $100 fine, and an award.”

The Los Angeles Police Department might beg to differ. On Thursday, police arrested a suspect in the case on suspicion of felony vandalism, declining to identify the suspect because he had not yet been booked.

Deadline posted video of the incident, and reported that the man identified himself as Jamie Otis, who said he was hoping to remove the star and auction it off to raise money for the women who have publicly accused the GOP presidential candidate of sexual misconduct. Trump has denied all allegations.

A police cruiser reportedly arrived on the scene at 6:15 a.m., but according to Deadline, Otis was already gone. A LAPD spokesperson told TheWrap the department received a vandalism call at 6 a.m. and was investigating the incident.

A pick, sledgehammer, construction vest, construction net and construction hat were recovered at the scene. The LAPD spokesperson estimated the damage at $2,500, which is a felony.

Trump received the Walk of Fame star in 2007 in recognition of his work hosting NBC’s reality series “The Apprentice.” Arnold Schwarzenegger has taken over that job since Trump turned to politics.

The star has been targeted by vandals before. Last January, Trump’s star was defaced with a swastika. Later, someone erected a wall around the star, an apparent reference to Trump’s desire to build a wall between the United States and Mexico.

Watch Mathis render his verdict in the video.