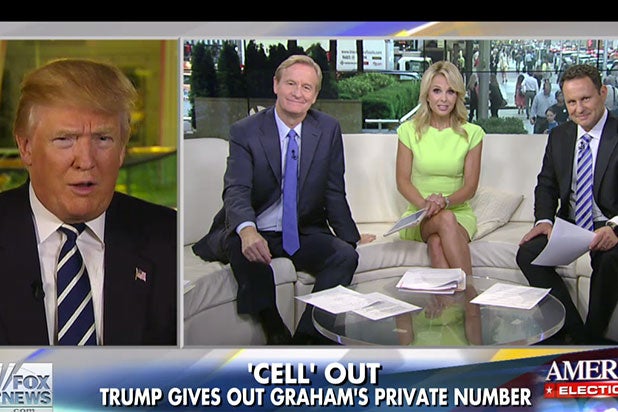 “Fox & Friends” host Steve Doocy compared presidential candidate Donald Trump to “a Navy SEAL” on Wednesday after discussing Trump’s various glitches from the past week — one of which was opining that Senator John McCain is “not a war hero” because he was captured by North Vietnamese troops while serving in the Vietnam War.

Doocy didn’t mention the remark McCain called offensive to “those who have sacrificed in conflict and those who have undergone the prison experience in serving their country,” but he did commend the real estate mogul for not apologizing.

“You know what? As somebody said to me yesterday, Donald Trump is like a Navy SEAL; he never backs down when he’s in a fight,” Doocy said.

Also read: Donald Trump Fires Back at Des Moines Register's Call for Him to Withdraw From Presidential Race

Trump himself has never served in the military due to multiple draft deferments he had received during the Vietnam draft, but was compelled to criticize McCain’s military record while appearing at the Family Leadership Summit in Iowa on Saturday.

“He’s a war hero because he was captured,” Trump said. “I like people that weren’t captured.”

Jimmy Kimmel was among those who were not happy with Trump over the statement, so it’s hard to imagine the ABC late-night host would agree with Doocy’s Navy SEAL comparison.

“Can you imagine being tortured for five-and-a-half years in a Vietnamese prison camp?” Kimmel asked his audience during a monologue. “The Vietnamese offer to release you, and you say, ‘No, not until you release the other Americans who’ve been here longer than I have,’ and then 42 years later the host of ‘Celebrity Apprentice’ — a man who, the closest he ever got to battle was a fight with Rosie O’Donnell, a man whose greatest wartime accomplishment was brokering a peace treaty between Gary Busey and Meatloaf — belittles you and calls you a loser?”

Although Doocy skipped out on grilling Trump on his “war hero” jab at McCain, he did inquire if the presidential candidate regretted giving out Graham’s personal cell phone number during a speech in South Carolina on Tuesday.

“Not at all,” Trump said. “He just came out — I’ve never seen anything like it, to be honest — he came out calling me a jackass on every program. The guy’s got zero in the polls, he’s got nothing going anyway, I don’t think he’s very popular in his own state because you heard the applause I was getting.”

He continued to say that everybody seemed to enjoy that particular part of his speech.

Before Doocy had the chance to ask another question, Trump continued:

“He called me names! You have to fight back, I mean, all of a sudden these guys are calling me names,” he said. “I’m trying to be nice, because I want to be nice, I’m a nice person, but everyone is calling me names and I guess since I went to number one in the polls, they are having a field day on me!”

Watch the full interview below. Fast forward to the 1:25 mark to hear the comments mentioned above.