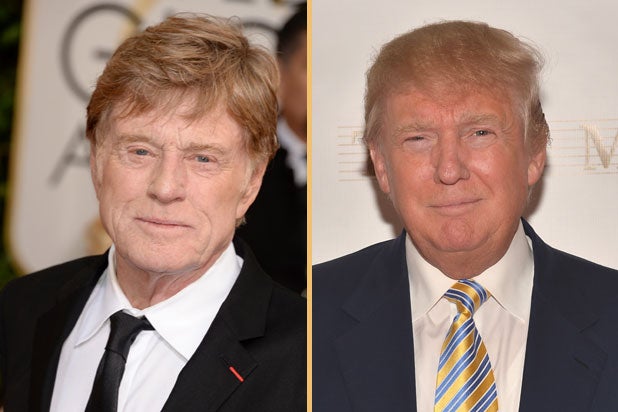 Earth to Donald Trump: Robert Redford is not endorsing you for president.

The Hollywood legend’s publicist issued a statement to TheWrap on Tuesday saying Redford “enjoys Donald Trump but not for President.”

During an interview with Larry King on Ora.tv a couple of weeks ago, Redford said he was glad Trump was running for president “because [Trump] being the way he is, and saying what he says the way he says it, I think shakes things up and I think that’s very needed. Because on the other side, it’s so bland.”

Trump apparently missed the interview when it ran. But on Tuesday tweeted under the banner of his campaign slogan, “Make America Great Again,” along with a few words from the sit-down, and a story about it that ran in The Hill.

“Wow! Such nice words from Robert Redford on my running for President. Thank you, Robert.”

Wow! Such nice words from Robert Redford on my running for President. Thank you, Robert. pic.twitter.com/TpV3w18BW6

While the “A Walk in the Woods” actor did in fact utter the words, he had a few other things to say about the controversial real estate mogul that made it clear he’s not exactly a fan. Words which Trump conveniently failed to include in his tweet.

“He’s got such a big foot in his mouth I’m not sure you could get it out,” Redford told King, only then he added, “But on the other hand, I’m glad he’s in there…”

Redford then went on to call the 2016 presidential candidates “Looney Tunes” and described some of their statements as “crazy stuff.”

“It’s like, come on, you guys,” said Redford. “You’re making us feel foolish, just having to watch you.”

As you can see, not exactly a ringing endorsement.