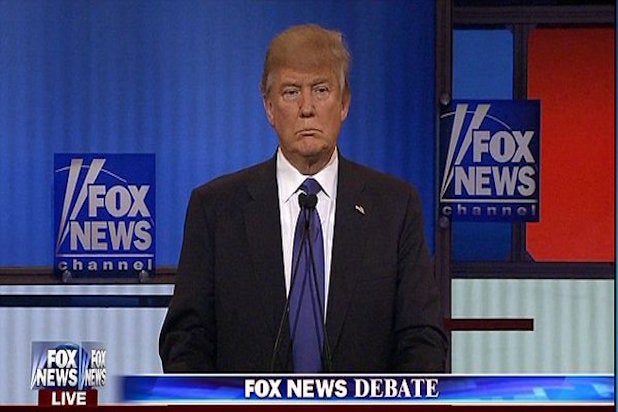 “Nice to be with you, Megyn,” Donald Trump said.

“Great to have you here,” Megyn Kelly replied, as Trump told her that she was looking well.

That was Kelly’s simple, yet cordial, exchange with GOP frontrunner Donald Trump about 35 minutes into tonight’s GOP debate on Fox News.

We all know the background: At their last meeting, Kelly asked a question about Trump’s treatment of women, Trump didn’t like the question, Fox News boss Roger Ailes defended Kelly and Trump skipped the most recent debate hosted by the network.

They met again tonight, when the Republican candidates gathered in Detroit, Michigan, for Trump vs. Kelly Part II.

Fox News’ Bret Baier told TheWrap in a recent interview that: “Megyn, as I’ve said many times, is a big girl and can handle herself. We’ll be sitting next to her and would obviously step in if needed, but it’s never needed.”

Trump took a subtle jab at Kelly later in the debate when he mentioned Howard Stern in a response. Trump has been critical of things the FNC host said to Stern years ago on his radio program. The two actually have this in

Trump and Kelly got a little more intense when Trump University was mentioned. Kelly said the billionaire candidate “fleeced” students of the school.

She then cited a class action suit of 5,000 plaintiffs involving “veterans, teachers and little guys” who say that they were “fleeced.”

Kelly then hit Trump again, saying that he countersued the lead plaintiff in the class action, and read a damaging comment from the court of appeals in the case: “The plaintiffs against you are like the Madoff victims …”