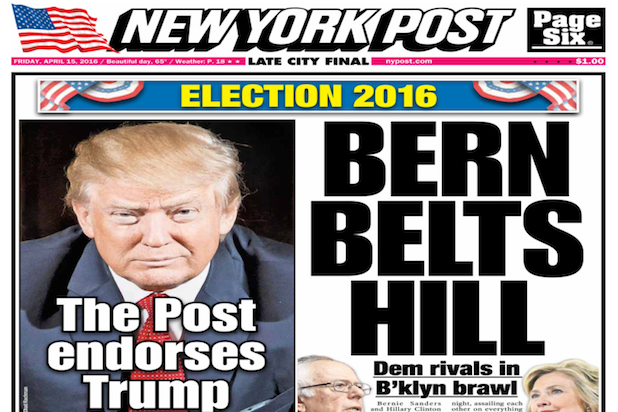 The New York Post has endorsed Donald Trump, just four days before the New York primary. The tabloid expects Trump to pivot “not just on the issues, but in his manner” and admits he’s making “rookie mistakes” and needs to act more presidential.

The Post goes on to say, “The post-pivot Trump needs to be more presidential: better informed on policy, more self-disciplined and less thin-skinned.”

The Post’s rival newspaper, The NY Daily News, recently endorsed John Kasich, on the grounds that he’s simply not Trump or Ted Cruz. Meanwhile, the Post feels Trump is a “potential superstar of vast promise.”

“Trump has electrified the public, drawing millions of new voters to the polls and inspiring people who’d given up on ever again having a candidate who’d fight for them,” the Post’s endorsement said. “That’s the work of the Donald Trump we know — a New Yorker, born and bred.”

The Post expects Trump to stay true to his supporters come the general election while “reaching out to those he hasn’t won yet.”

Trump’s primary competition in the GOP race, Cruz, made headlines a few weeks ago by ripping Liberal “New York values,” which has backfired as the two battle for New York votes. Bernie Sanders recently appeared on the “Nightly Show” and mocked both GOP candidates for their take on New York values.

The New York primary is April 19.