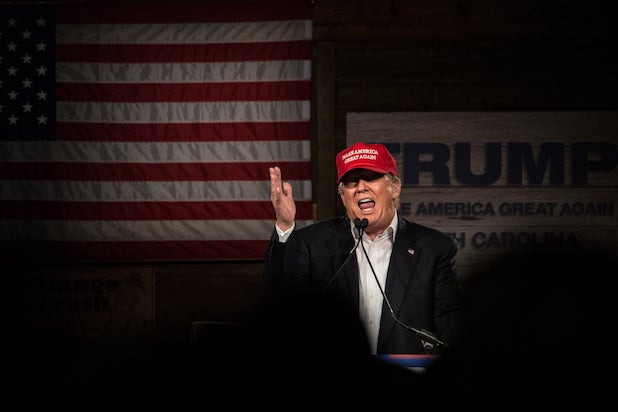 How’s this for a kicker?

The Huffington Post will now end every article about Donald Trump with a special note calling him a “racist,” “liar” and a “xenophobe,” while reminding its readers of the GOP presidential frontrunner’s controversial proposal to ban Muslims from entering the United States.

And just to be sure Trump got the memo, the site has already added an addendum to a Wednesday article about the business mogul.

“Note to our readers: Donald Trump is a serial liar, rampant xenophobe, racist, birther and bully who has repeatedly pledged to ban all Muslims — 1.6 billion members of an entire religion — from entering the U.S.,” the addendum read.

“We’re planning to add this note to all future stories about Trump,” a HuffPost spokesperson told TheWrap in a statement Thursday. “No other candidate has called for banning 1.6 billion people from the country! If any other candidate makes such a proposal, we’ll append a note under pieces about them.”

Last summer, the Huffington Post announced it would relegate its Trump coverage to the site’s “Entertainment” section, calling his campaign  a “sideshow.”

But the popular website walked back its controversial decision in December after the GOP frontrunner announced his proposal to ban all Muslims from entering the country.

“We will no longer be covering his campaign in Entertainment,” HuffPost co-founder and editor-in-chief Ariana Huffington wrote in December. “But that’s not to say we’ll be treating it as if it were a normal campaign.”