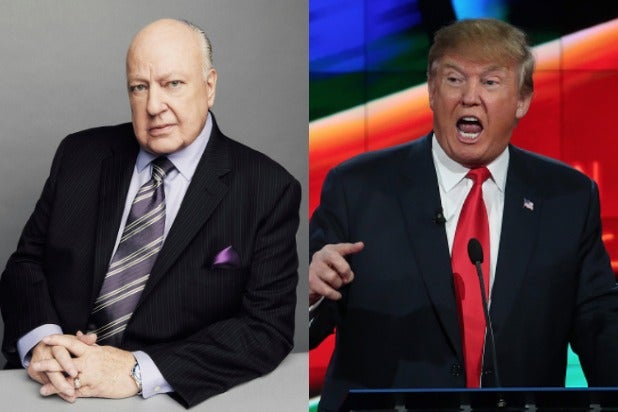 Donald Trump is having such a hard time keeping his staffers these days, he couldn’t hold on to them if they came covered in Velcro.

It seems the GOP nominee has lost yet another key ally — Roger Ailes.

The embattled Fox News co-founder, who was recently forced to step down as CEO amid a flurry of sexual assault allegations, had been reportedly advising Trump and helping him with his debate prep — but according to Vanity Fair, they are no longer on speaking terms.

The cause of the rift is still a bit hazy.

According to New York Magazine’s Gabriel Sherman, Ailes became frustrated with Trump’s lack of focus, while VF’s Sarah Ellison says Trump’s camp claims it was Ailes who had a hard time staying on track, going on long tangents and talking about his war stories.

Ailes was forced out of Fox News after more than two dozen employees accused him of sexual harassment, most notably former “Fox & Friends” co-host Gretchen Carlson, who claimed she was fired after she rebuffed his sexual advances. Though he has categorically denied the allegations, Fox News paid him an eye-popping $20 million in settlements.

Meanwhile, Trump has been facing his own sex abuse scandals, as several women have accused him of unwanted sexual advances.

Trump’s deluge of accusers has been fairly constant since footage from a 2005 “Access Hollywood” interview showed him bragging about how, as a celebrity, he could do anything he wanted to women without even asking, including grabbing them by their genitals.

On Wednesday, Sherman announced he was working on a miniseries about Ailes’ sexual harassment saga with Blumhouse Television.

Based on Sherman’s reporting, the TV version will be run by “Spotlight” writer-director Tom McCarthy. Married journalists Sherman and Jennifer Stahl will co-executive produce and pen the limited series.

“Anthony Hopkins in the Hitchcock Film was a spitting image,” Sherman said, while also floating John Goodman as a possibility.