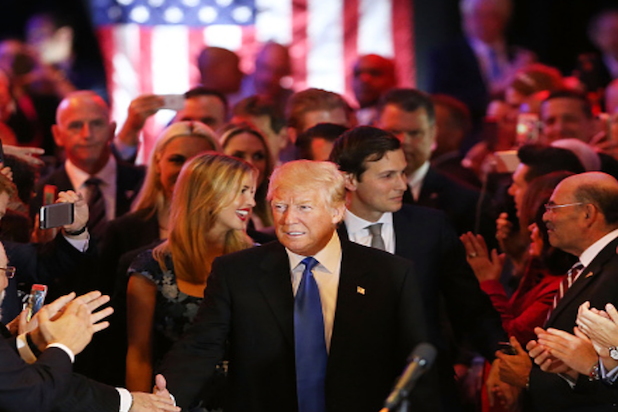 Donald called Ted Cruz a “tough, smart guy” and said he has an “amazing future” following Cruz’s decision to drop out of the GOP presidential race on Tuesday night.

Trump stepped up to the podium at his campaign headquarters in New York City with a lot to celebrate after Cruz withdrew from the presidential race and Republican National Committee chairman Reince Priebus declared Trump the presumptive GOP nominee.

“Just so you understand, Ted Cruz; I don’t know if he likes me or if he doesn’t like me, but he is one hell of a competitor,” Trump said.

The presumptive GOP presidential nominee said he’s “going after Hillary Clinton” and she would be a “poor” president who doesn’t understand trade.

In what could become a common theme for the general election, Trump tied Clinton to NAFTA, the North American Free Trade Agreement.

“I’ve competed all my life,” Trump said. “Whether it’s sports, business or now, for 10 months, politics. And I have to tell you that I have met some of the most incredible competitors that I have ever competed against right here in the Republican party.”

Trump spent a lot of his victory speech thanking his supporters and even admitted he didn’t think it would play out this way.

“This has been an amazing evening. I didn’t expect this,” Trump said. “What Ted did is really a very brave thing to do. A great thing to do, because we want to bring unity to the Republican Party. We have to bring unity. It’s so much easier if we have it.”

If the RNC chairman has his way, the GOP doesn’t have to worry about a brokered convention anymore — but it remains to be seen if establishment conservatives will support Trump.