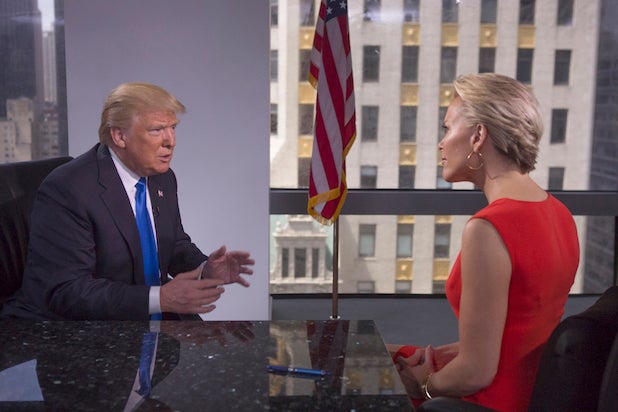 Presumptive GOP nominee Donald Trump told Megyn Kelly that it “might have been a favor” when she asked a question about his treatment of women at last summer’s now-infamous Fox News debate.

“Because I felt so good about having gotten through… I said, ‘If I could get through this debate, with those questions, you can get through anything,'” Trump told Kelly during her much-promoted Fox broadcast special on Tuesday night.

Trump – who has promised that he will live-tweet the interview, which was pre-taped – didn’t like the debate question and repeatedly attacked Kelly on Twitter. Fox News boss Roger Ailes defended Kelly, causing Trump to skip one of the network’s debates. They eventually met again at the third Fox News GOP debate of this election cycle, but it took Kelly initiating a one-on-one conversation in Trump Tower to finally hash things out. After the meeting, Trump agreed to the interview for this week’s “Megyn Kelly Presents.”

Kelly’s special coincidentally aired nearly two years to the day from Walter’s retirement from TV journalism. Kelly’s broadcast special underscores the Fox News anchor’s desire to become the next Walters. A high rating for tonight’s performance could lead to more shows in the same vein.

Here are some additional highlights of the Trump portion of the special:

On whether he views himself as being powerful:

“Well, I don’t view myself as that. I mean, I view myself as a person that – like everybody else – is fighting for survival. I, that’s all I view myself as. And I really view myself now as somewhat of a messenger… You know, this is, um… This is a massive thing that’s going on. These are millions and millions of people that have been disenfranchised from this country.”

On whether he was ever bullied in life:

“No, I wasn’t. But I have seen bullying and bullying doesn’t have to just be as a child. I mean I know people are bullied when they’re 55 years old…You know it happens, right? But you’ve got to get over it. Fight back. Do whatever you have to do.

“I’ve been saying during this whole campaign that I’m a counter puncher. You understand that. I’m responding. Now, I then respond times maybe ten, I don’t know. I respond pretty strongly, but in just about all cases I’ve been responding to what they did to me.”

On whether his anger is real or part of a strategy:

“Well, I am a real person. I don’t say ‘Oh gee, I am angry tonight, but tomorrow you are my best friend.’ See, I do, I do have a theory that, you know, when somebody does… And this could happen again with us; I mean, it could be, uh, even doing this particular interview… I have great respect for you, that you were able to call me and say, ‘Let’s get together and let’s talk.’ To me, I would not have done that. I don’t say that as an, you know, as a positive; I think it’s a negative, for me. And you walk into Trump Tower, you didn’t… We didn’t have like on a neutral site or over at Fox or something. That would be a whole different thing and I wouldn’t have done it.”

On whether he thinks journalists need to be “nice” when covering a presidential race:

“Fair. I don’t care if they are nice. They have to be fair.”

His response when Kelly reminds him that he used the word “nice”:

“Well, OK. Uh, no, I don’t think so. I mean, I might have said they weren’t nice, but that doesn’t mean they have to be nice. I mean, I have known many… I’ll tell you what: In a certain way, what you did might have been a favor, because I felt so good about having gotten through… I said, ‘If I could get through this debate, with those questions, you can get through anything.'”