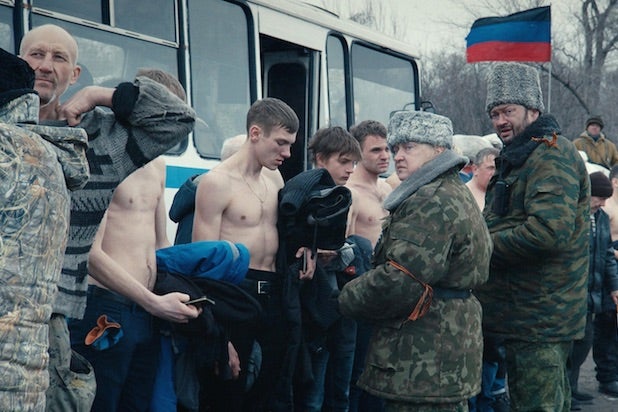 No one is spared in “Donbass,” director Sergei Loznitsa’s scathing look at the (still ongoing) war in eastern Ukraine. The film is just as harsh on us the viewers as it is any of its venal characters — who get saddled with names like “Fat Woman” and “Ugly Man” in the end credits.

No is one is spared — and no one is safe. And as if to make that point crystal clear, the director sometimes repeats whole sequences and introduces jarring bouts of violence that hadn’t happened the first time through, as if to remind us that no gets out of this bloody conflict alive.

Now don’t go harping about spoilers – there is, simply put, no real way to spoil what is essentially a narrative-free travelogue through a bruised and bloodied corner of the world. The only recurring character is the war; the script’s conflict is the real-world conflict itself, and the so the movie functions as a series of interlocking vignettes inspired by real-life amateur videos from the warzone.

Here’s a bunch of soldiers raiding a poor granny’s bag for sausages; there’s a well-off government employee trying to convince her mother to leave a refugee shelter; watch out for the German journalist trying to report while under heavy fire.

Loznitsa and his band of both amateur and professional actors find different tones and registers for the various sequences, with some playing as dark comedy and other as battlefield horror shows. One memorable interlude plays like the director’s 2017 Cannes entry “A Gentle Creature” in miniature, following a poor sap as he goes to reclaim his stolen car and falls deeper and deeper into a bureaucratic black hole. With that one, the film wants to prime us for outrage.

Though this film and its predecessor share certain thematic similarities, what’s most striking is how utterly different they look and feel from one another. While “A Gentle Creature” had a dreamy, almost hallucinatory visual style, “Donbass” is bathed in the harsh light of inexpensive digital cameras. Such an aesthetic U-turn is par the course for Loznitsa, who seems to have a film ready for every major festival and often toggles between genres and styles, working just as much in documentary as he does in narrative fiction.

While much ink has been spilled about what director was and wasn’t chosen for Cannes this year and who would or wouldn’t show up, Loznitsa makes for an interesting case. The director played in the main competition last year but opens Un Certain Regard this year, a move that to some would seem like a step down.

But it doesn’t come across as a demotion or any kind of slight. “Donbass” is a more challenging, perhaps less fully rounded work, but it remains the uncompromised vision of a high-level international auteur. There’s always room that in Cannes.