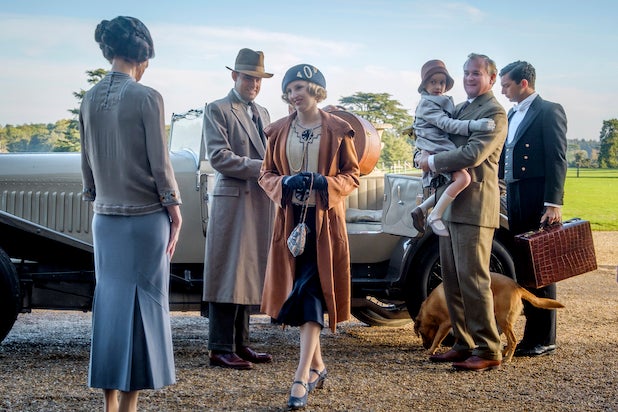 This weekend’s box office charts were expected to be a log jam among the September releases, but one film has risen clear above the others: Focus Features/Carnival’s “Downton Abbey,” which earned a $31 million opening weekend from 3,079 screens.

“Downton Abbey” was projected before the weekend for an opening in the high teens and expected to leg out with older audiences well into October. But now it has passed the $23.6 million of “Insidious: Chapter 3” for the highest opening ever for a Focus release, setting it up for possibly an even longer run as a milder alternative to films like “Joker” that come out next month.

“Audiences were clearly ready to come back to Downton and visit the Crawleys and all the familiar faces upstairs and downstairs,” said Focus President of Distribution Lisa Bunnell. “At its core, it’s a story about family, and audiences — both original fans and newcomers — are uplifted by that laughter and joy of the film.”

“We’re thrilled to be a part of something that began nearly 10 years ago with our friends and colleagues at NBC International and Carnival Films, and to have it remain with the NBCUniversal family with us now and do so well is amazing.”

With fans of the ITV/PBS series making up the overwhelming majority of its audience, reception has been predictably strong with an A on CinemaScore and a 4.5/5 on Postrak, joining an 85% critics score on Rotten Tomatoes. Audience breakdown was overwhelmingly female at 74%, with 60% over the age of 35.

The film opened in 15 countries overseas and took in $10 million, including $3.6 million from the U.K. in its second weekend. It’s global total now stands at $61.8 million.

In a virtual tie for second this weekend are the other two new releases, Fox/Disney’s “Ad Astra” and Lionsgate/Millennium’s “Rambo: Last Blood.” Both films are estimated for a $19 million opening, meeting pre-weekend expectations.

With an $80 million budget before reshoots, “Ad Astra” is extremely unlikely to match that figure in domestic grosses given its tepid audience reception. While critics praised the film with an 82% Rotten Tomatoes score, Postrak polls sat at 2.5/5 and CinemaScore surveys yielded a B-, the lowest among this weekend’s new releases.

Also Read: 'Ad Astra' Film Review: Brad Pitt Journeys to the Edge of Space and the Depths of His Character's Soul

Overseas numbers were somewhat better with $26 million from all international markets except Taiwan, China and Hong Kong, where Disney is not handling distribution. That gives the Brad Pitt sci-fi adventure a global start of $45 million, 49% ahead of the pace set last year by “First Man,” which grossed $105 million worldwide.

A $19 million opening for “Rambo: Last Blood” just edges out the $18.2 million opening earned by the last “Rambo” released in 2008. The action film was panned by critics with a 30% Rotten Tomatoes score, but did solidly with a B on CinemaScore and an 85% Rotten Tomatoes verified audience score. Audience demographics were 66% male and 42% men over the age of 30.

September holdovers complete the top 5, as STX’s “Hustlers” and Warner Bros./New Line’s “It: Chapter Two” each grossed $17 million. While “Downton Abbey” brought a bit more competition than expected for female moviegoers, “Hustlers” still held well with a drop of just 49% in its second weekend and a 10-day total of $62.5 million. “It: Chapter Two” has a total of $179 million domestic after three weekends and a global total of $385 million.

9 Movies About Sad People in Space, From 'Gravity' to 'Ad Astra' (Photos)

There’s a long tradition of depressing sci-fi in films like “Moon,” “Interstellar” and “2001: A Space Odyssey”