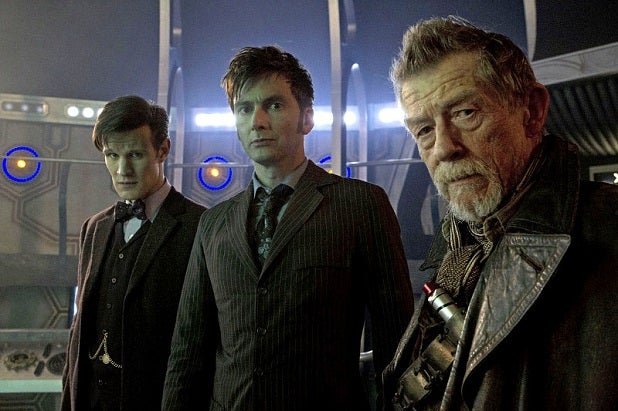 Who knew Doctor Who would be box-office dynamite?

The 50th anniversary special, “The Day of The Doctor,” has brought in $10.2 million at the worldwide box office, BBC America reported Wednesday. It was simulcast on TV and in theaters around the world starting on Saturday and continued with repeat showings through Monday.

In the U.S., encore screenings of “Doctor Who: Day of the Doctor” took in $4.7 million from 660 U.S. theaters Monday – and even had a better per-screen average than “The Hunger Games: Catching Fire.” It took in an impressive $7,155 from each location Monday, more than double the average of “Catching Fire.”

Lionsgate’s Jennifer Lawrence sequel was No. 1 on Monday, with a strong $12.3 million from 4,163 theaters – a $2,959 per-screen average. “Day of the Doctor,” which was presented by NCM Fathom Events, finished second overall on Monday, ahead of “Thor: The Dark World” and “The Best Man Holiday.”

The global simulcast of “Doctor Who: The Day of The Doctor,” which aired at 2:50 p.m. ET in the U.S., delivered BBC America its best telecast ever in live and same-day viewing with 2.4 million total viewers and 1.2 million among its key demographic Adults 25-54.