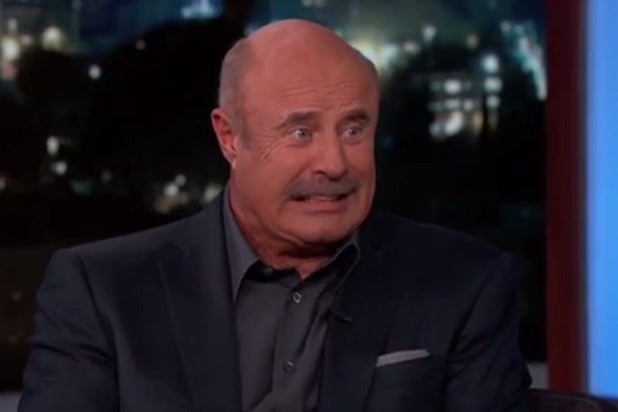 Dr. Phil McGraw and his wife have filed a $250 million defamation and libel lawsuit against American Media, Inc. (AMI), the publisher that owns the National Enquirer, Radar Online and Star Magazine.

In the suit, filed July 5 in Palm Beach County, Florida, the couple claimed that AMI magazines have published more than 85 articles about them that have “falsely categorized their marriage,” among other more specific and nefarious charges.

The stories depict the popular TV host as a “physically and verbally abusive husband,” guilty of “infidelity, sexual assault, sexual battery,” as well as just generally being a “philandering pervert,” the couple claimed. The pieces also state that the McGraws are “facing imminent divorce,” the suit said.

“It’s a delicious irony that Dr. Phil, whom a California judge has called a ‘charlatan’ and the Daily Beast has called a ‘quack’ whose ‘unseemly mélange of exploitation, celebrity parasitism and credential mining goes back years’ has filed a lawsuit against AMI and accused it of being a ‘trashy tabloid,'” AMI told TheWrap. “This from the man who visited Britney Spears in the hospital in 2008, then issued a public statement about the visit in violation of her family’s trust.”

“AMI looks forward to successfully defending itself against Dr. Phil in a court of law, and exposing his stale and fraudulent claims for what they really are,” the publisher continued. “Our titles remain committed to uncovering hard truths and stories that matter most to our millions of readers.”

AMI publications have dipped deep into Dr. Phil’s past, including threatening to post a supposed drunken bar brawl in which he reportedly smashed a beer mug over a man’s head — something that couldn’t have factually happened as written, given a debunked timeline outlined in the lawsuit.

Stories have apparently also tackled the mental health professional’s high school dating exploits, old business deals, and even the circumstances surrounding the divorce from his first wife — among other “alleged wrongdoings,” according to the suit.

“It is because AMI’s fictional ‘stories’ of Dr. and Mrs. McGraw are so out of character with the real life McGraws that people are misled to spend their money on AMI products,” the McGraws’ attorneys wrote in the filing. “The unauthorized misappropriation of the McGraws’ names and likenesses, coupled with false and sensationalized articles about the McGraws, sells magazines.”

So why do the plaintiffs believe the defendants have continued to operate in the manner, despite previous attempts to curb this sort of coverage?”

“AMI is a balance sheet insolvent company that operates on the edge, financially and otherwise,” the suit stated. “AMI’s business model has been to libel and defame for profit.”

“Confronted with financial difficulties, declining circulation, and the need for cashflow, AMI has shamelessly and unlawfully sought to generate revenues by misappropriating and capitalizing on the McGraws’ names and likenesses through commercial advertising coupled with false stories that are scandalously out of character with the couple known to the public,” it continued.

In just a week, "Pokemon Go" has captured the world's attention, and for good reason. Aside from renewing interest in the legendary pocket monsters, the mobile game has taken augmented reality technology and exposed it to an audience of untold millions. The result has been a series of anecdotes and news stories that either prove that technology can be a force for discovery and prosocial behavior, or another sign that we are falling into a dystopia.